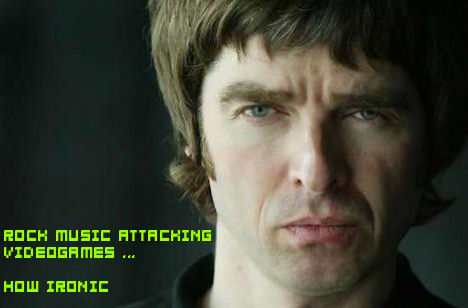 As the United Kingdom becomes more of a cesspool, Oasis’ Noel Gallagher has rolled up his sleeves and done his bit to help, by blaming violent videogames. His comments come after lamenting that “scumbags are taking over our streets.”

“People say it’s through violent video games and I guess that’s got something to do with it.

If kids are sitting up all night smoking super skunk [cannabis] and they come so desensitised to crime because they’re playing these video games, it’s really, really scary.”

A creator of good music Noel might be, but a social commentator he is not. As usual, for all this talk of videogames and that oh-so useful buzz term “desensitize,” not once does someone talk about the parents. Nobody ever dares talk about the precious, untouchable parents. In Britain, the parents of a group of boys who attacked a goth couple by stamping on their heads allegedly smirked in the dock, finding it amusing as their own children were found guilty of murder. Parents refuse to accept responsibility for unruly kids, and nobody seems to dare hold them accountable for the actions of their loathsome spawn.