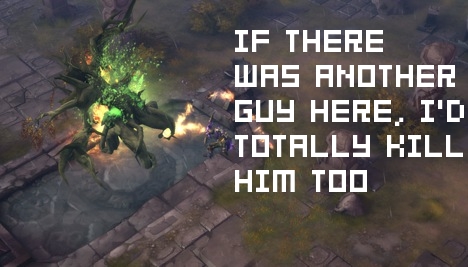 According to a post by Blizzard employee “Bashiok” on the official World of Warcraft forums, the art of PK’ing will be highly discouraged by Diablo III’s game mechanics. A poster brought up the issue because of his concern with Diablo II’s interface, to which Bashiok replied:

We have a large focus on cooperative play for Diablo III, and the mechanics and design decisions related to multiplayer are likely going to be based on supporting and encouraging it as much as possible, and not breaking it down.

That doesn’t mean that PvP won’t have its own focus, but those are details and features we aren’t yet discussing.

To me, that sounds like Blizzard isn’t going to change anything about the old system. Having to run back to a town just to toggle abilities is a bit bothersome, but I don’t think rampant PK’ing is what Blizzard wants with their new title. I’ve read about how out of control “griefing” is in Age of Conan, and while hilarious, it seems like a pretty nasty problem for new players. Perhaps Blizzard just wants its potential players to purely focus on looting and gathering items like the gnomes they want us to be.

No word has yet been received on how much players can spam chat boxes, offer a dual, or make characters grunt.