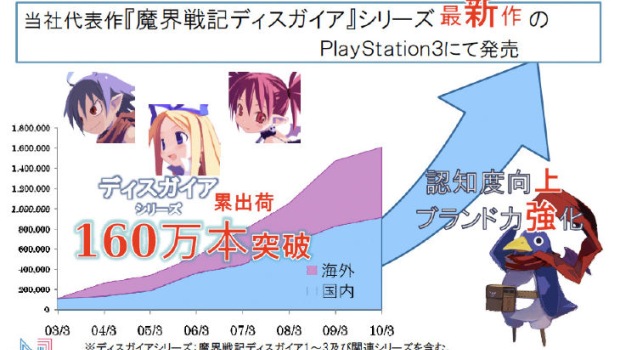 It looks like 2009 was not such a great year for Japanese developer Nippon Ichi (NIS). With a loss of 299 million yen ($3.33 million) for the fiscal year the company is looking to turn their ship around (go here if you can read Japanese) into the waters of profitability. As with many companies these days who are feeling the pinch, this means a bit of streamlining is going to be done.

NIS is saying that they will be cutting out most of their externally developed games, as they believe they are one of the main causes of their massive loss. As such they are planning to only release 8 games over the next year.

Disgaea, the company’s best seller, will be seeing another release on the PS3 as the company hopes to raise profits. This will be part of NIS’s new focus on potential developing markets, which include the PS3 and the ever expanding North American market. The question is can their mostly indie titles become big hits.