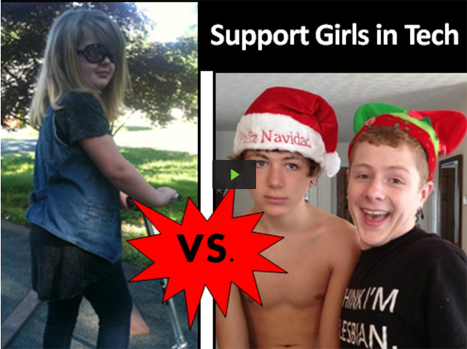 [Update: Due to some internet leg-work on the part of Reddit readers (and our own c-blogger Shinta), it has come to light that this campaign may not quite be what we see at face value on Kickstarter. According to several sources, it has been deduced that the mother of Kenzie, Susan Wilson, actually runs her own female-only crowdfunding website, called “Fund Her.” Not only that, but Mrs. Wilson is also a known as one of the “Most Powerful Women Entrepreneurs” according to CNN, so many think her claims to raise money should be under scrutiny.

Sure, Susan probably already has the money to send her daughter to the camp. It’s apparently no secret that this is something she could easily afford herself. However, that’s not the real issue there. There’s no rule against crowdfunding for money for something that you could afford yourself — who hasn’t wished they could just spend someone else’s dough on something? — but, sadly, the very campaign itself is the real problem.

Using the money from Kickstarter to “fund my life” aka paying bills, going on vacation, or even paying a tuition, is a direct violation against the terms of service. And while it may be a camp, there is still a tuition fee for said camp, and therefore Kenzie’s dreams of attending via Kickstarter may be dashed against the rocks. Spamming Twitter and other social media outlets is also a violation, and Susan’s Twitter feed has been hitting up everyone from The Ellen Show to Lady Gaga, clearly in the hopes of garnering more press and funds for the “cause.”

There are other issues here as well, such as preying on those keeping an eye on the whole “Women in Gaming” hot-button issue (which I admit was the reason I even gave this particular funding a glance) by not only playing up the daughter role, but also using the term “sugar daddy,” and even throwing her own sons, Kenzie’s brothers, under the bus as bullies who claim girls can’t work in games.

Clearly, I cannot speak myself on the validity of the Kickstarter, nor of any “ulterior motives” or any such claims the internet is making about this particular funding project, or even Susan Wilson herself. No one can, really. However, beyond the hyperbole, what is apparent is that, at face value, the project itself is asking for funds that are in clear violation of the site’s terms of service.]

Mackenzie Wilson is nine years old, a straight-A student, and loves role-playing games. She (through the help of her mom) has posted a Kickstarter to help her attend an RPG STEM camp so she can learn how to create her own RPG, which she says will have “a good storyline and cool graphics, but has shorter cut scenes, [and] less menus.”

This particular Kickstarter (like another we could mention) is focused on women in gaming, but here it’s focused on more of a developer standpoint, saying it wants to help promote the idea of younger girls getting interested in careers in tech.

The funding goal was just $829 to get Kenzie to the camp, but as of this writing, they’ve already done twenty times that since the campaign launched Wednesday. The extra money she’ll be getting will be going towards a new laptop on which she’ll start creating her ideal RPG. This is awesome.