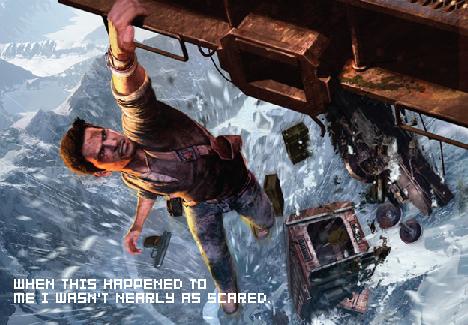 The latest issue of Game Informer features a cover story all about upcoming PlayStation 3 exclusive sequel Uncharted 2: Among Thieves. While we can’t post scans of some of the amazing new screens (damn you, copyright infringement!), some new, interesting information about the game was revealed.

The largest bit of news seems to concern the game’s story and characters, which will focus on Drake as he searches the world for ships that Marco Polo “lost” while returning home to Italy. In addition, it looks like Drake has moved on from sassy Elena, as Among Thieves will feature a brand new female sidekick named Chloe Frazer. Asked about whether Elena or Sully will return, creator Naughty Dog had no comment. I only hope some form of epic cat fight pops up in the game’s final act.

Along with the above information, a bunch of more detailed news about the game was revealed. While the original Uncharted only used 30% of the PS3’s power, according to producers, this sequel will push Sony’s console to the limit, showing off improved graphics and zero load screens throughout the game’s entirety. Hit the jump for a full list of some of the most notable new info.

As a huge fan of the first game, I am very excited about Uncharted 2: Among Thieves. The promise of more varied environments (snow!), a more robust fighting/shooting mechanic, and an even bigger focus on a cinematic presentation makes this one of my most anticipated games of next year. What do you think? Are you excited for this sequel? What changes do you hope are made to make Uncharted 2 even better than the superb original?

Here are all the details from the Game Informer article:

-There’s a new girl named Chloe Frazer. GI asked about Elena and Sully’s return but they had no comment.
-The story is about looking for the ships that Marco Polo “lost” while returning home to Italy.
-Melee combat is more dynamic now.
-They mentioned they were using only 30% of the PS3’s power with Drake’s Fortune and are planning to use nearly 100% with Among Thieves.
-A demo was shown to GI with Drake going through a city (I believe in Nepal), and he’s stealthily taking out guards and escaping the city.
-Nolan North returns to be Drake and Chloe Frazer is played by Claudia Black (Stargate SG-1, Farscape).
-The Sixaxis mechanics were ditched for such things as throwing grenades.
-One of the weapons revealed is a rocket launcher that Chloe uses (might only be for the cinematic).
-There are no load screens.
-The score is being composed by Greg Edmonson (same guy from the first one).
-Weapons can be used in any stance (running, behind cover, hanging, climbing a wall, etc.).
-You can now move while aiming behind cover.
-“In Uncharted 2, every character fully interacts with the dynamic geometry moving around them, and environments in the background are real parts of the game world”
-“If Drake’s on top of a train, he’s going to be shaking with the train as it moves around”
-“As he gets inside, his moveset is going to change, and he’s going to be a lot more secure because the wind’s not blowing.”
-The graphics look better than Uncharted 1.
-Button sequence cinematics such as the final boss have changed so now Drake is now fully controllable in these parts…I think (This one’s also hard to describe).
-Climbing seems improved upon. You can climb lamp posts now among other new things.
-If there is an enemy patrolling a rooftop you’re climbing a wall to, you can pull him off the roof while hanging on the wall.