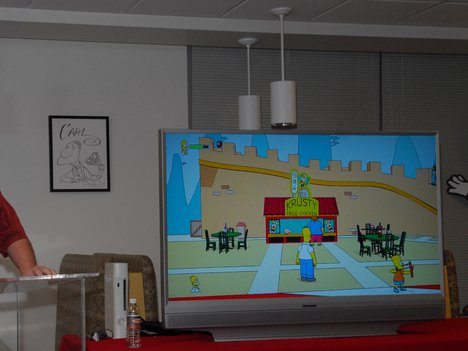 The Simpsons used to be such a great series … that is until it became a watered down, bastardized version of its former self. With the release of the upcoming movie, however, the good ‘ol days may make a welcomed return. Such is also the case with what Electronic Arts is trying to accomplish with the newly-aquired Simpsons license. Gamespot was able to get a first glimpse, and really, it all sounds good in the hood to me:

… the entire family (save Maggie) will be playable. Apparently, the Simpsons will realize just a few minutes into the storyline that they’re actually trapped inside a video game, and they’ll use that newfound freedom to envision new powers for themselves that they can access throughout the game’s action levels. For instance, Homer will pick up calories throughout each level by picking up edible power-ups, and once his calorie meter is full, he’ll be able to transform into the Homerball, a massive sphere of flab that can roll over and demolish almost any object or enemy. Later on in the demo level, we saw Homer pick up a chili pepper that turned him into a more powerful lava version of the Homerball. By contrast, Bart’s special ability will be to transform into Bartman, which will let him glide around slowly with his cape. Naturally, he’ll also have a slingshot projectile attack to use for ranged offense when the need arises.

And what’s even better, it seems we may be able to relive some great gaming moments:

The Simpsons’ realization that they’re imprisoned inside a game may inform their superpowers, but according to EA, it will more importantly inspire them to indiscriminately lampoon the video game industry (including EA itself, purportedly) and pop culture in general.

Check out the jump for some other important info snagged from Gamespot. 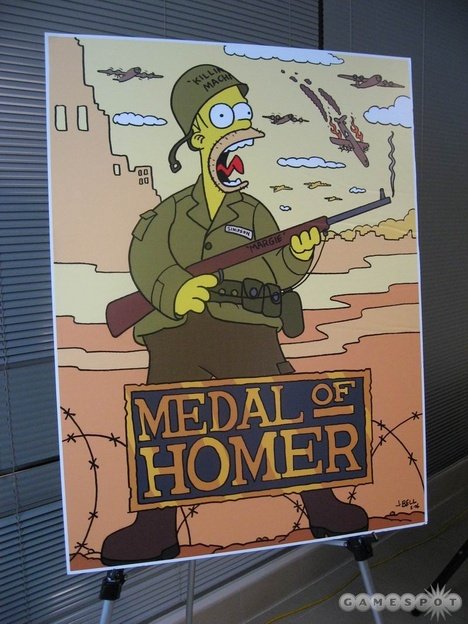 The rest of the important stuff:

Alas, representatives on hand weren’t prepared to offer any examples of the kind of referential humor we can expect to see in the game, but a number of posters at the event amusingly inserted Simpsons characters into scenes from Medal of Honor, Batman Begins, Grand Theft Auto, and EverQuest, so we have a decent idea of the direction the game may be going in.

The level we did see was called “Around the World in 80 Bites” and centered on Homer eating his way through an international food festival in Springfield, which had him doing battle with a number of familiar characters, including Groundskeeper Willy, who was blocking the way to the next area. In addition to occasionally invoking the Homerball, Homer was able to attack with punches and kicks similar to those seen in the classic Konami Simpsons arcade game of yore. This particular area didn’t show us a lot of the sort of referential humor that EA says will pervade the final product, but the game is still in a prealpha state, so this demo served as an early indication of the final gameplay more than anything.

On the upside, the demo level did give us a good look at the visual style EA is using, which looks like it will very faithfully re-create the appearance of the hit TV series. The characters are cel-shaded, of course, but EA is also implementing a technique that will essentially flatten the character models from whichever angle the camera is viewing them from, to attempt to re-create the 2D, hand-drawn look seen in the show. Speaking of capturing the show’s essence, a number of the series’ writers penned the script for the game–which will amount to nearly an hour of original cutscenes and dialogue, all voiced by the show’s original actors. This will naturally be a family-rated game, but the Simpsons were said to be spouting fouler dialogue in the game than you’d expect from the show. The Simpsons’ creative authority also supervised the creation of plenty of new characters and locations for the game, which will clearly range far beyond the nebulous confines of Springfield itself.

EA is referring to the 16 levels in the game as “episodes,” and each one will take place in a new environment with a unique title and storyline. Each of these episodes will feature two Simpsons family members, and you’ll be able to switch between the two at any time. What’s more, a second player can grab a controller at any time, hit the start button, and commandeer Simpson number two for some split-screen action. We’ll hope to get some hands-on time with this one in the coming weeks to find out how well EA is living up to its obviously serious commitment to this hallowed franchise. The Simpsons’ newest game is due out in late fall of this year.