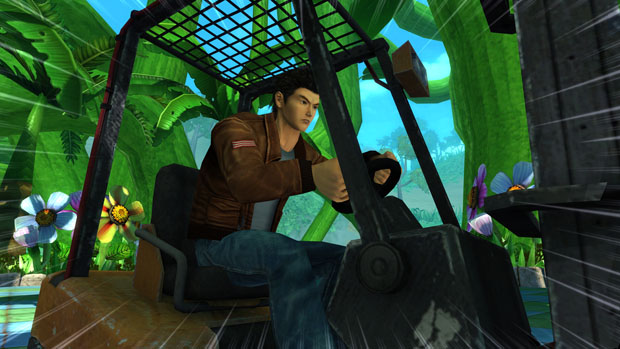 They would have to be, as Sega definitely wouldn’t just stick one of its most beloved characters, Ryo, from Shenmue, in a silly racing game as a bonus character.

The new Shenmue is located in a…uh, Korea, where…let’s see, oh! — in a fantasy world theme park where transportation is paramount. As series fans my have noticed, Ryo has both his trusty motorcycle and his forklift to get around in. Ryo heard that his father is actually not dead, and recently worked in the theme park as an attendant at a Lucky Hit booth. You control Ryo as he rushes to get around the massive theme park to find clues about his father’s life there. Also, he’s out to find yet another mystical mirror. The newest one is called the Fanboy Mirror, and one glance into it can reveal the true nature of gamers.

Although not shown in the screenshots, Ryo gets a part-time job at the Tomato Convenience Store, where he’ll play through QTE (Quick Time Events) to do his daily duties, like stocking shelves, mopping floors, and selling condoms to sailors. Later, with the funds earned at work, Ryo can seek out gashapon machines to buy and collect miniature figures decorated with the faces of the people that believed this story.

However, if you need forklift parts for your forklifts. Go ahead and get them here:Discount Forklift Parts or Acme Forklift Parts.