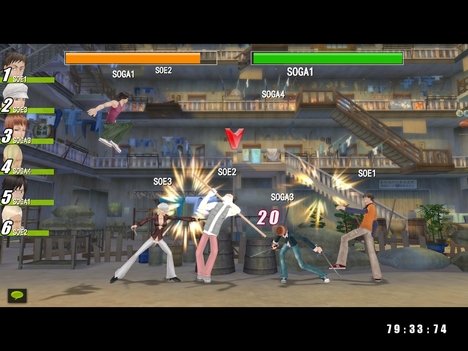 In case you weren’t aware, Sony Online Entertainment via their studio in Taipei, Taiwan, is developing an MMO (yes, another MMO) based on the Stephen Chow movie Kung Fu Hustle. The game is a tad different, however, from other MMOs. For one, it’s a fighter and two, it doesn’t look like your typical online universe.

After seeing this at a recent SOE event, I can’t say I was exactly thrilled by the possibilities, but I suppose if you’re a fighting game fan or MMO junkie looking for a different kind of fix, this could help you out — besides, it’s free. It’s worth noting that the game is only slated to come out for the PC in Asia right now, but Sony says they are looking to expand it to European and North American markets.

Here’s a quick rundown of the game:

Kung Fu Hustle combines the best elements of classic fighting games from the past and adds compelling character designs, new technology and trademark humor from the movie for a new generation of gamers. Players will encounter familiar characters from the movie, such as Sin, the Sidekick, the Landlady, Beast and more.  Kung Fu Hustle features a branching story mode, where players can hone their Kung Fu skills against a host of wacky enemies as they battle their way across China. By cooperating with friends, players can learn new sets of moves to add to their martial arts arsenal.

In Versus Mode, eight players can go head to head in all out multiplayer mayhem, creating that old-school arcade feeling online. Gamers can even watch and scout potential opponents online before challenging them. While Kung Fu Hustle will be free to play, players will be able to purchase extra lives and hundreds of virtual items for a nominal fee.