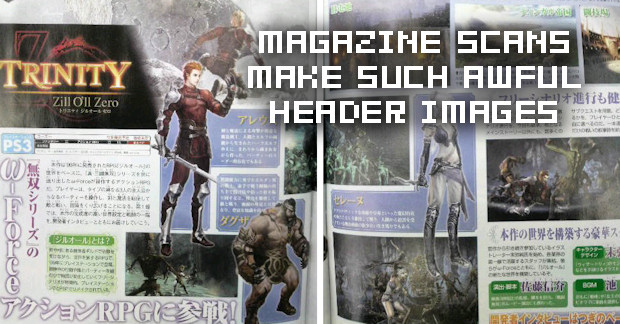 Obscure PSX RPG Zill O’ll is getting a sequel, and it’s coming exclusively to the PS3. Published by Koei, Trinity Zill O’ll Zero is sounding interesting if only for the fact that it pledges to be a mature RPG with some pretty dark themes, marking it out as a more engaging experience than the typical “boy hero saves the world and comes of age” story that has been turning JRPGs into drivel for the past ten years.

The original Zill O’ll has seen three incarnations — the PSX original, a PS2 remake and a PSP release that is yet to hit Western shores. It’s one of the few Koei games I haven’t been able to find and play, making it quite remarkable. It’s apparently pretty decent, too.

We have some low quality images of the current-gen sequel, as leaked from Famitsu magazine. Check ’em out in the gallery and revel in yet another PS3 exclusive. Sony’s really lucked out lately.

Filed under... #Exclusive on Destructoid#Role-Playing Games