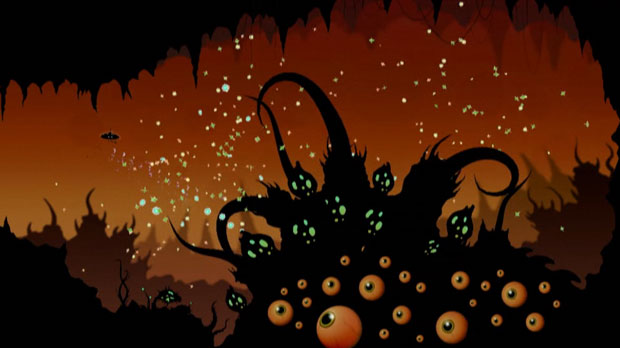 Are you awake yet? I know it’s early, but you’re gonna want to rub the crust out of your eyes for this one. Artist Michel Gagne has teamed up with Joe Olsen of FuelCell Games to produce what might be the heaviest weapon in the “games as art” debate I’ve seen in quite some time: the forthcoming PC title called Insanely Twisted Shadow Planet.

In 2005, Gagne created a little something for Nickelodeon called Insanely Twisted Shadow Puppets, and teamed up with Olsen in 2007 to begin work on a game set in that same world. The end result is arcade-style gameplay with animation and visuals that rival some feature films in quality and imagination. Put Invader Zim and H.P. Lovecraft in a blender with a few of those Superman cartoons from the 1940s, and the trailer you’ll find after the jump is pretty close to what would come out.

The team has met with Microsoft, and seems quite confident that Insanely Twisted Shadow Planet will be making its way to XBLA at some point as well. Here’s hoping it does, because the bigger the screen we get to play this on, the better. You can keep an eye on the game’s blog for the latest info on the project; that is if they haven’t both popped out of your head after you watch this trailer.

[Via Offworld, with thanks to Brandon for two awesome videos in as many days]