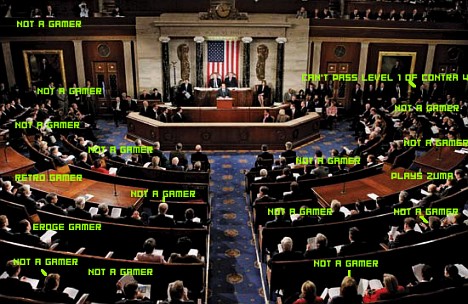 The Video Games Ratings Enforcement Act would require ID checks for the purchase of any M or AO rated title. It would also require stores to display details on the ESRB (Entertainment Software Rating Board) ratings system. Those that don’t comply could be hit with a $5,000 fine.

“The images and themes in some video games are shocking and troublesome. In some games, high scores are often earned by players who commit ‘virtual’ murder, assault and rape,” said Terry.

“Many young children are walking into stores and are able to buy or rent these games without their parents even knowing about it. Many retailers have tried to develop voluntary policies to make sure mature games do not end up in the hands of young kids, but we need to do more to protect our children,” he added.

I hate being carded, but this really isn’t a bad idea. With this law in place, perhaps some of the videogame blame lazers fired by the media will be deflected. What do you think?