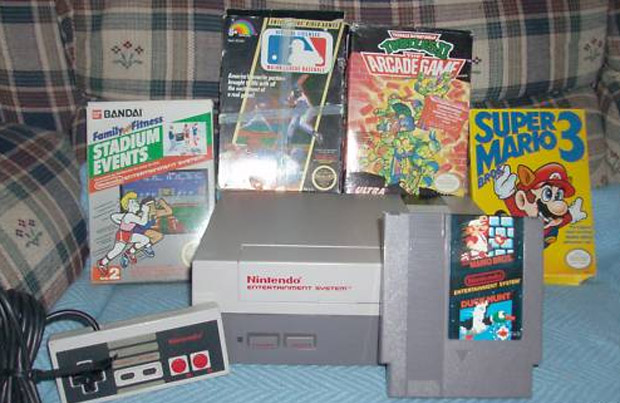 I was at the local used game store yesterday and was eyeballing one of those silly Chinese all-in-one systems that have all the cartridge slots you’d ever need to play all your old games. It was $35. $35. Even then, I was pacing, weighing out my options, doing math in my head, and thinking about my unpaid bills. Finally I said to myself: f*ck it, that’s what emu…Virtual Console is for.

Some guy on eBay went all the way. No, went beyond. He paid $13,105 for a Nintendo Entertainment System and five games. Hey, I liked TMNT and Super Mario Bros 3 as much as the next guy, but I can waddle down to the earlier mentioned used game store and nab those and about 10 more for less than $20. To be fair, some were in their original packaging with manuals, like Stadium Events.

From the item eBay item description:

I HAVE HAD THIS STORED IN THE CLOSET FOR YEARS FOR MY KIDS TO PLAY BUT THE WAY THAT ELECTRONICS COME & GO AND CHANGE FROM ONE YEAR TO THE NEXT THEY WANTED ALL OF THE NEW HOT ITEMS OF THEIR OWN NOW AND NOW IT’S TIME TO GET RID OF THINGS THAT ARE NO LONGER BEING USED OR WANTED.  THIS SYSTEM WORKED PERFECT WHEN I STORED IT BUT SOMEHOW OVER THE YEARS, WE HAVE MANAGED TO MISPLACE THE AC CORD & THE TELEVISION HOOK UP.

I hope you buy your kids some of the “NEW HOT ITEMS” with your earnings, sir. This seems fake or wrong, but there was actually 36 bids, and it was actually completed at $13,105. Who knows if the winner paid or not.

Oh, and I loved this: “MY ITEMS DO COME FROM A SMOKING HOME”