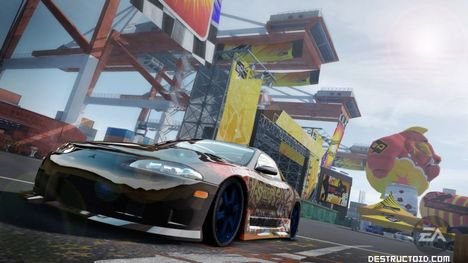 EA just hit us with some screens of the next installment of their popular racing franchise, Need for Speed: ProStreet, and it looks hot. Now, before we all start ranting about how there’s no way the game is going to look like this when it ships, and we start hurling tomatoes at Electronic Arts, let’s talk what you definitely will see when the game hit shelves this November.

Aside from an obvious graphical overhaul (we get to see the sun again!), the game’s new “Autosculpt” technology will allow you to not only customize the appearance of your car, but also how it performs. And if you drive like I do (a blind maniac), smashing your car into things will leave noticeable dents and scratches on your custom body.

EA is also promising a “revolutionary” online game, with an emphasis on a competitive social experience. I guess this means racers worldwide will have a chance to try out some of those new racial slurs they’ve been working on.

Need for Speed: ProStreet will be available for the Xbox 360, PS3, PC, Wii, DS, PS2, PSP, mobile phone, and any other platform EA thinks they can make an easy buck off of.

Filed under... #Electronic Arts#Gallery#How many wolves have to die?#Need for Speed