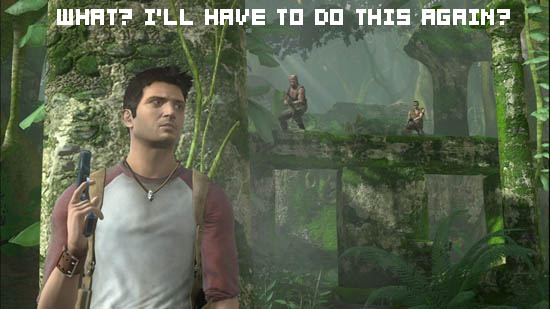 Naughty Dog’s Uncharted: Drake’s Fortune is at the top of many PS3 owners’ Christmas lists this holiday, and for good reason: this involving and gorgeous adventure title is like a breath of fresh air, and is easily one of the best titles this games blogger has played all year.

1UP brings us some good news from Naughty Dog co-president Evan Wells. When talking about what’s in the cards for his company, an Uncharted sequel was mentioned.

“We developed Uncharted as a franchise. The pulp action/adventure genre lends itself perfectly to serialization and continued episodes, which is one of the reasons we were attracted to it,” Wells said. “Right now we are brainstorming on what Naughty Dog’s next project will be, but even if we don’t do an Uncharted sequel right away, you can pretty much count on us doing one in the near future.”

Naughty Dog’s other big franchise, Jak and Daxter, could also possibly be in the works, and it may take advantage of the Uncharted game engine.

“Jak and Daxter is a definite possibility some time in the future,” Wells said. “There is a lot of interest around the office in going back to that franchise and seeing what we could do with it using the Uncharted engine.”