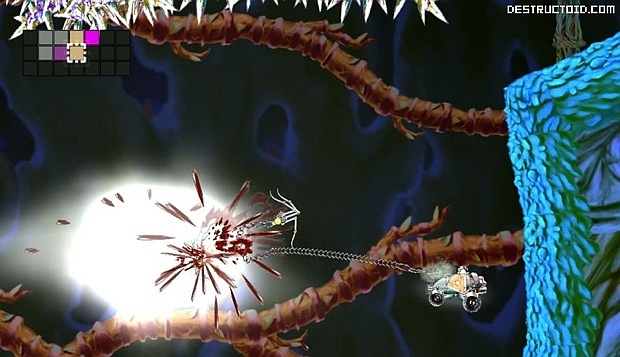 While at Electronic Entertainment Expo, I hooked up with Nathan Fouts. He’s the developer of the award winning Xbox LIVE Community Game Weapons of Choice and probably soon-to-be-award-winning Indie title Grapple Buggy — a game announced only weeks before the big event.

Grapple Buggy is like Bionic Commando, except you’re not in control of a man with a freakish arm. Instead, you control an alien car (buggy) with two freakish arms and two alien drivers. The buggy’s wheels can grip the planet’s surface, but the preferred method of travel is through the buggy’s mechanical arm — an arm that can grapple and propel the craft throughout the game’s environment.

Aside from the artistry, there were two things that grabbed me: controls and puzzle complexity. Grapple Buggy’s swinging mechanics are fluid like the Xbox 360 rehash Bionic Commando. The puzzles are organic and slightly challenging. The first puzzle in the demonstration, for example, has you spit a captured creature — the arm can store a single creature in front of the buggy — into the mouth of a huge creature blocking a cavernous doorway. Seems easy, but the catch is that the creatures used to solve the puzzle are located at the beginning of the level. The puzzle, therefore, required awareness of the environment, as well as a bit of knowledge of the buggy’s toolset.

Keep your eyes peeled for this one and check out the screenshots in the gallery and the video available after the break. Grapple Buggy looks like it could be spectacular.