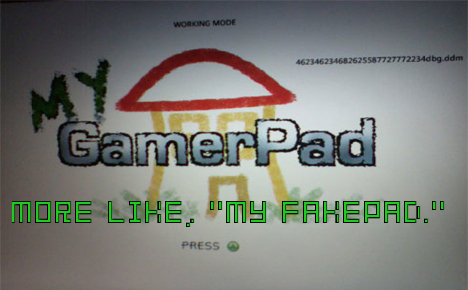 Today, thatvideogameblog, via 4chan, discovered that at least one of the “My Gamerpad” pictures was a fake. A user over at the (mainly) humor website found a deviantart render that looked suspiciously like the background utilized in the My Gamerpad portrait.

Hit the break to check out the two pictures.

This is the original My Gamerpad picture that appeared on June 26.

And this is deviant art user saffiq’s “3d kolej sains” which was uploaded on April 30 this year.

The resemblance is certainly uncanny. After the Intellisponse leak, almost every fuzzy picture looks as credible as the other. If you missed it, one of the more provocative things that came from the leak was a portrait of Microsoft’s “Avatars” service. Allegedly, Avatars will be the new representation for users on the LIVE service and a pretty good rip-off of the Mii to boot. With that knowledge in hand, it certainly lent the tiny bit of credence the My Gamerpad pictures needed to emerge from the bowels of the Internet.

I wonder, are any of you disappointed that Microsoft will apparently not have a Home-like service?