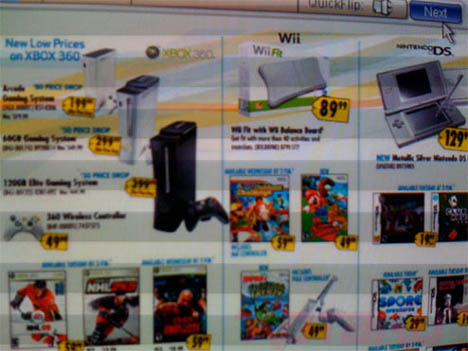 We’ve been hearing about an Xbox 360 price drop for awhile now, and we’ve heard it so much now that we don’t doubt it’s coming. Poorly named electronics retailer Radio Shack dropped the news in a circular not too long ago, and now other retailers are letting the cat out of the bag.

Now Best Buy is in on the price drop game. An internal screen showing the drop has been passed to Kotaku today. It shows the September 7th catalog, where the prices are lower on all three SKUs: Arcade $199, 60GB $299, Elite $399. Apparently Kmart is in on it, too. Hell, GamePro has even reviewed the Arcade system, citing the $199 price in their headline.

I was at a local Walmart yesterday, stocking up on vaseline and whatnot. I ran by the electronics section and saw a Microsoft rep speaking to about a half a dozen sales associates. The rep was explaining the transition to new pricing, telling them to prepare for the 60GB model replacements and such. He was just starting to detail how they should know which kind of customers would want each specific SKU when they ran me off.

The dude had mad armpit stains.