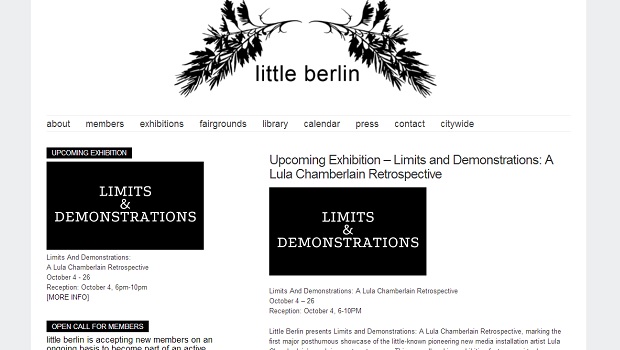 An exhibition of an in-game character is teased

After reading Edge‘s “making of” feature on Kentucky Route Zero, I’ve been reminded that Act III is still not here yet. As if to almost tease me further, developer Cardboard Computer has developed a pair of websites paying tribute to conceptual artist Lula Chamberlin, who players might remember from the beginning of Act II of Kentucky Route Zero.

The main site is for a gallery dubbed Little Berlin that will be showcasing Chamberlin’s art, the other is a fan site that features scans of her work. What’s interesting is the fan site mentions that Chamberlin passed away, which is surprising — she was alive and doing kind of okay when we met her in the game. I’m just hoping she didn’t take the elevator to the floor with all the bears.

Poking around the Little Berlin website, there’s a few dates that caught my eye; October 4th is mentioned as a date for a reception at the gallery, along with October and November the 7th being the dates for an open Web Studio. Now there is no confirmed date for Act III but it would brighten my week to have more Kentucky Route Zero to enjoy this weekend.