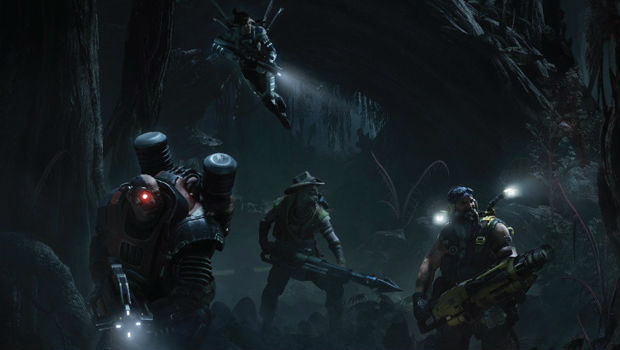 The cat is out of the bag, and Turtle Rock’s next project is Evolve, a space themed game where four players face off against a player controlled creature. If you’re intrigued by the concept and want to know more, OXM has dug up some more details, and it all sounds pretty interesting.

Different planets will seemingly play host to new objectives, and in the case of the planet “Shear,” humans have to eliminate a barrier before the alien downs all of the players at the same time. Should a human player die, they’ll respawn in two minutes back on the map.

Guns apparently have unlimited ammo but are restricted by a cool-down system, similar to first Mass Effect. Some of the class specific skills have been announced, like the hunter’s “personal shield” and the ability to focus damage. The support class can (surprise) buff other players, and “The Trapper” can actually trap the monster somehow. Lastly, the medic can heal others with a gun, and sports a sniper rifle.

The first alien is named “Goliath,” and can grow 30 feet tall once it’s fully evolved. As it “levels” up it can gain access to new skills like the ability to climb walls, breath fire, and throw rocks. At first it can use a more stealth approach as it moves towards its cocoon evolution, but once it busts out you basically can’t miss the 30 foot hulking beast.

It all sounds pretty ambitious for sure, and I can’t wait to see what other aliens are going to be revealed. I’m still holding out for a 100+ foot tall Kaiju.