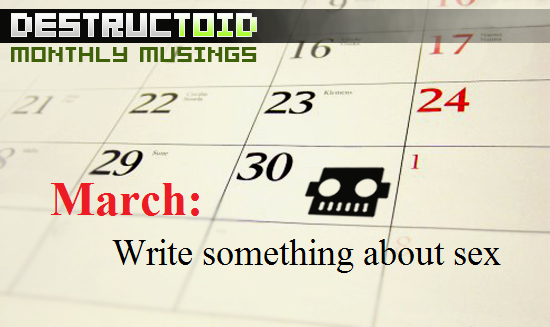 I tried to name this month’s theme something clever, but my attempts ranged from the unfocused (“Plugs and ports”) to the downright awful (“Condoms and controllers”). These things happens.

This month’s musing theme is about videogame sex. Sex within videogames, sexual desires revolving around videogames, and sex in aspects of videogame culture where one wouldn’t typically expect it.

Earlier this week, a colleague of mine Tweeted that, in virtual terms, he’d been getting laid with alarming regularity over the past few months. After getting his particular version of Commander Shepard to get it on with Tali in Mass Effect 2, he activated this oh-so-horrific sex scene in Heavy Rain.

And I’m not sure what to make of that. Is it cool that games are trying to explore other avenues of simulated human interaction beyond talking and punching, or is something about the inherent control we have over these sex scenes just plain creepy? Lots of players refuse to follow the romance plots in BioWare games — why is this? Is it something that will come to change with time, or is sex just something our medium of choice is ill-equipped to handle?

As always, the theme is tremendously vague. As always, you community members will likely pull something worthwhile out of it, anyway.

You could focus on the (over?)sexualization of videogame characters — that’d be a tired-ass subject any other year, but Bayonetta nicely complicates it, I’d argue.

You could talk about your own sexual escapades in the virtual world. You could also possibly try to explain why the previous sentence actually began to burn my fingers as I typed it because it felt so fucking creepy.

Seriously, if you’re of the opinion that videogame sex scenes are a little creepy — and even though my own Shepard has thus far bedded women from two different species, I’d count myself in this category — why do you think that is? Is it just the uncanny valley? Is it the fact that our quasi-control over the situations puts us in this weird position of seeming like voyeurs, but worse?

Jim’s got an editorial on optional sex in games coming up (something about how most of the time, you get your characters laid by simply deciding who you want to bang, and then just talking to them a bunch until they let you) — maybe that’ll give you some ideas.

If you want to contribute, go make a Dtoid account and write a cblog titled, “Something about sex: blah blah blah,” with the “Monthly Theme” tag selected.