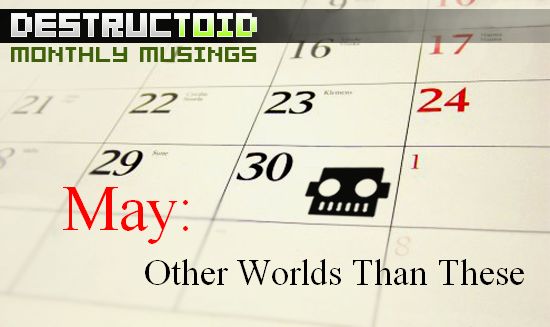 Every month, members of the Destructoid community are given the opportunity to have their writings posted on the front page thanks to our Monthly Musings theme.

Good job with last month’s theme, etcetera, etcetera. Your ability to pull worthwhile articles out of crappy guidance is as impressive as it is typical at this point.

This month, the topic is “Other Worlds Than These” — extra points if you catch the reference — focusing on those games that attempt to create believable, immersive, interesting worlds. By “world,” I don’t just mean huge sandboxes where every sidewalk tile is rendered down to the microscopic level, but any game that tries to create a believable backstory and context for the events in the game.

Yeah, Grand Theft Auto counts, but so does Metal Gear Solid, with all its interconnected, decade-spanning plot lines. BioShock counts thanks to Rapture’s believability, but so does something like Snatcher, which is pretty much unbelievable at every turn.

What videogame worlds mean the most to you? What is their importance to you? Do you want to live in these places, do you find them terrifying in comparison to the real world, or are they somewhere in between? What place does immersion serve in videogaming, if any? What makes a game world immersive?

All these topics are at your disposal. Hit the jump for a further clarification of the topic, and instructions on how you can get your ideas posted on the front page.

If you want a chance to have your reaction to this month’s theme posted on the front page, just create a Destructoid account, and write a community blog with the title “Other Worlds Than These: blah blah blah” and the “Monthly Theme” tag selected. It’s that simple.

I’ve been on a rather large Snatcher kick lately, which led directly to this month’s theme. A game like Snatcher is — well, I hesitate to even call it a game, really. You have no real choices to make, and the minute-to-minute gameplay just consists of looking at stuff until the next plot point appears. Still, the game remains incredibly satisfying due primarily to the strength of its game world. You can interact with a heck of a lot of stuff, and all those interactions (especially the optional ones) are clever and/or insane and/or just plain interesting. One typically doesn’t play Snatcher for the plot or the gameplay, but for the game world itself.

Similarly, I wonder if that’s why people like games such as Oblivion. Despite having really shallow, barely-RPG-esque gameplay and a boring story, the idea of being able to run around in a huge and consistent world might be the thing that allures people in the first place. Maybe. I’m not sure.

Either way, that’s the topic. Any questions?