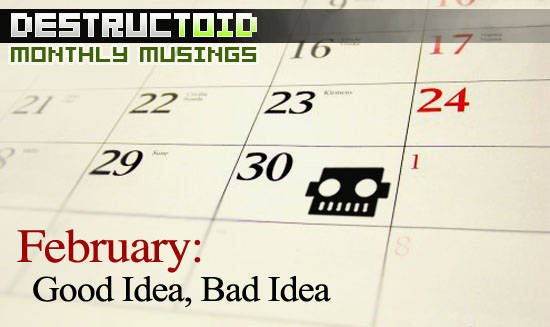 If you don’t know what the Monthly Musings are, go here and educate yourself.

This month’s Musings topic is a little something I like to call “Good Idea, Bad Idea.” Basically, you take one or more individual gaming mechanics — double jumping, context-sensitive cover, dialogue trees, what have you — and discuss the merits or faults of each mechanic. Ideally, the two mechanics would come from the same genre, so as to provide a solid base for comparison and contrast.

For example, say I’m interested in third-person tactical shooters. I might talk about how I love the alternating first and third person views in Rainbow Six: Vegas (good idea), but how I hate the context-sensitive use of the A button in Gears of War (bad idea), and why.

This is your opportunity to show your critical eye for game design: what do you think works or doesn’t work, and why?

For a further explanation of the theme, and directions on how to submit your article for consideration, hit the jump.

While this theme may initially seem very restricting, you’ve got a lot of wiggle room and can play around with the format.

For instance, instead of comparing and contrasting different mechanics from different games, I could take just one mechanic I’ve frequently seen — let’s say, Quick Time Events — and discuss how that mechanic has been used really well in some games, but pretty poorly in others before analyzing why. So long as you’re doing some sort of comparison/contrast between game mechanics which are related in some way, you’re fine.

You can start writing theme-related community blogs now, and we’ll be accepting (and hopefully posting) submissions until the end of the month. Apart from the requirement that you follow the theme, there really aren’t too many ground rules for the Monthly Musings: just be sure to title your cblog “Good Idea, Bad Idea: _________” and you’re fine.

Be as creative, angry, or analytical as you wanna be; the goal here is to start discussion of any sort. Get some interesting debate going, and you’ll be promoted to the front page.

Any questions? Ideas? Hit the comments. Otherwise, make with the musings.