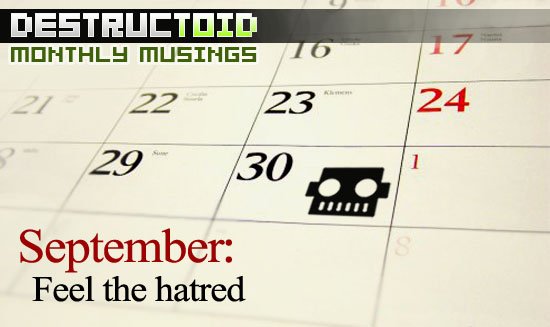 Last month’s topic was, in one way or another, about love. I asked you fine cbloggers which aspects of your favorite games you loved so much to keep coming back to them over and over, and you responded.

Just to change things up, this month’s topic is all about hate.

What moments, characters, mechanics, games, or series, or aspects of gaming culture invoke an irrepressible hatred in you? Not just cynicism, or anger, or irritation, but legitimate hatred?

This is in a sense the most difficult Monthly Musings topic yet, because you still have to remain civil and thoughtful when discussing something which causes you unquenchable hatred. In other words: no flamebait, trolling, or jackassery. This topic is meant to be an examination of those aspects of games which infuriate us to no end, and an exploration of why they’re so effective at doing so.

A poorly written hero? A really well written villain? Cliched mission objectives and lackluster game mechanics? There are an awful lot of things to hate about games (especially on the Internet), but your job for this month is to take an intelligent and analytical of those things.

Make sure to put “Feel the hatred” in your cblog title, as well as choosing the Monthly Musings tag before you publish it.

Hit the jump for a further clarification of the theme, and to ask any questions you may have.

As mentioned above the fold, this theme is very intentionally vague — any number of gaming-related things can inspire hatred, and you get to choose which one affects you most. On the one hand, you could write about how Sephiroth’s murder of Aeris caused you to hate him more than any other videogame character; on the other hand, you could talk about literally hating how the showboaty antics of the Derek Smarts and Denis Dyacks of the world harm the games industry and irritate gamers worldwide.

The only thing I must stress again is, do not post flamebait. We don’t want every article turning into a big argument for no legitimate reason, and we won’t frontpage any cblogs which seem to be geared toward producing that effect.

Also, it bears mentioning that, by complete creepy coincidence, Harukai managed to inadvertently write the first Feel the Hatred article of the month a few hours ago.