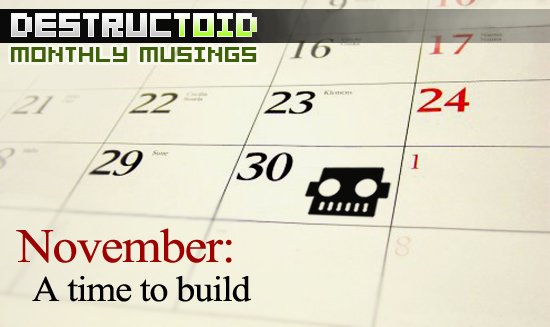 I’m very glad to see you folks found a lot of things to be terrified by last month — October included some of my favorite Musings by you guys, ever. Let’s hope that November will, if not surpass October, at least get a little close.

This month’s theme is “A Time to Build”. With LittleBigPlanet out and (sort of) functioning, one can’t help but think of those games which, rather than forcing the player through a linear series of missions, either provide the player with an external toolset to create their own experiences (like the Far Cry 2 mapmaker), or somehow integrate those creative elements into the game proper (like, say, Crayon Physics Deluxe).

What with so many games being focused on destruction, dismemberment, or chaos, what sort of fun have you had either creating levels or situations of your own, or experiencing those created by other users? Mods you’ve enjoyed, levels you’ve built, things you did in Sim-whatever games — all are open for discussion.

Hit the jump for a further clarification on the theme, and, as always, the instructions for posting.

– An awesome level you created for an existing game

– A game you made yourself

– A really clever, unusual solution you came up with to a puzzle or situation that the designers probably didn’t foresee

– Any cool situation from a Sims game: “Oh man, I locked him in a room with no food but a bunch of drinks and soon the entire room was filled with pee”

– A great user-created mod you played

And so on. Or, you can just talk generally about the joys of creativity, or the nature of programming, or what have you.

As always, title your cblog with the name of the theme (“A time to build: bah blah bork”), check the “Monthly Musings” tag in the editor, and if your article is really badass or results in interesting discussion, we’ll promote it to the front page.