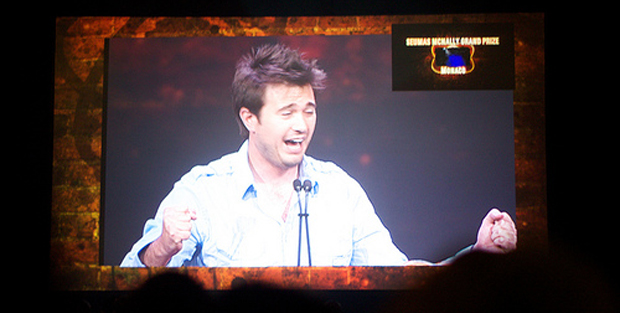 Maybe it’s because I live in a city with a sky-high number of hippies per capita, but my default image of indie developers has always been a slackerific one. I always envision short bouts of coding casually sandwiched in-between sessions of disc-golf, eating vegan tamales, and hiking in flip-flops. Surely a life where you get to make the games you want and thumb your nose at The Man is an idyllic romp through the posies, right? Wrong.

It turns out that without the benefit of publisher and/or investor support, most indies have got to make their games better, cheaper, and faster in order to survive. That’s not to say that mainstream developers don’t crunch or work long hours, but with indies it means more work for fewer people, and many can’t hack it. Andy Schatz, founder of Pocketwatch Games and developer of the upcoming Monaco, recently set the record straight for me when we discussed what it takes to make indie games in such a competitive environment.

Andy was quick to point out that not having a steady work schedule can contribute to the failure of a project, saying that “I know a lot of indies work sporadically, and I don’t think that’s actually the best way to work. I think a lot of the indies that are struggling are working that way. There’s a chicken or egg thing there, they might be struggling because of that, or they might be working sporadically because they’re struggling.”

“Having a schedule, and knowing when you’re typically going to start and stop — unless you’re particularly inspired and you want to keep going, which does happen quite often — I think it’s a healthy thing. You want to try and get as much work done as you can; I think the most successful indie games today are the product of obssesive workers. Basically, what I try to do is allow myself to be obssesive, but try to retain the sanity of a normal work week.”

It’s easy to overlook the lengths that some indie game developers must travel to realize their visions, but because they work alone or in small groups, the cost in terms of work/life balance can be astronomical. Talking to Andy further, it seems that this is not an isolated phenomenon.

“If you talk to Ron Carmel from World of Goo, he’ll tell you that he basically destroyed his life in the second year of working. The first year was pretty normal, and then when they were closing in on releasing the game in the second year he basically destroyed his own life to get the damn game done. When he talks about it, despite the fact that he’s had great success with World of Goo, you still hear a little twinge of regret in there. You talk to the Super Meat Boy guys, and they, they don’t eat, they destroy themselves too. You know, they work their butts off, so that’s coming out … and hopefully that just kills.”

It seems that a certain masochistic streak is necessary in order to make it in the non-AAA wilderness. Having gotten my hands on both Monaco and Super Meat Boy, it sure looks like the long hours and sacrifice have resulted in some high-quality products. Here’s hoping they all make enough money to take a vacation.