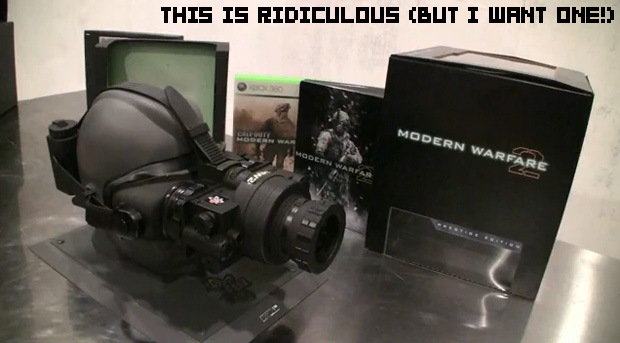 Infinity Ward doesn’t want to see the Call of Duty: Modern Warfare 2 Prestige Edition on store shelves or at a discounted price. Speaking to IGN, IW community manager Robert Bowling confirmed that the pre-order bonus — which includes night-vision goggles — is indeed limited. In other words, you won’t buying the sweet set of Modern Warfare goodness on Amazon for nickels in the future.

“We’ve already been asked by retailers to up the production numbers due to demand,” Bowling said, “which we immediately denied.”

“We decided from the beginning that we want this to be for the hardcore fans and early adopters. The fact that it is actually limited is one of the coolest parts, which is why we’ve individually numbered every copy.”

Bowling added later that one run is all fans will get: “It was important to us that this be a true collectors’ edition and as such, we do one run, and it’s finished. The Prestige Edition is NOT something you’re going to be seeing on the cheap 2 months after launch.”

The Prestige Edition is a bit of a running joke around the industry. We’ll be greatly saddened when we have to report that some kid stalked his girlfriend with help from the night-vision goggles. But we suppose there’s a chance that the dumb ones won’t be hopping on this bundle early enough.