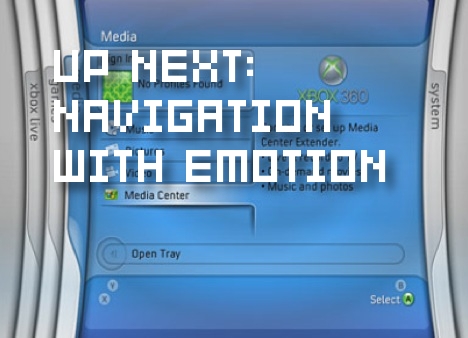 “Microsoft does not comment on rumors and speculation” is the standard response when it comes to asking the monolithic publisher about anything that has yet to happen. This very same line was given once again to GamePro on Friday when Microsoft was asked about the upcoming spring update. While the response isn’t particularly interesting, the reason why GamePro would even ask about the update is.

A mysterious source tipped off Kotaku about a feature of the update. A feature so crazy, it seems beyond this dimension. Apparently, the rumored update is allegedly going to feature motion-controlled menus and buttons. Somehow, using a motion controller to navigate through the dashboard is supposed to alleviate the issue of drudging through all of the garbage on the Live network.

This is definitely one of those things that you should take with a grain of salt. While I would personally enjoy using a motion controller to switch through blades and download crappy arcade titles, I think it may be safe to assume that this will not happen. Or, it will not happen in quite this capacity. I imagine that, if anything, the update would incorporate the usage of motion controls much like the Wii handles menu navigation with the retro controller. It is just a different device handling the same procedure.

But, we’ll see if a controller is announced at E3 first, before we start yelling for a Robocop spike downloader or a Matrix plug in the back of our heads to assist with our dashboard functions.