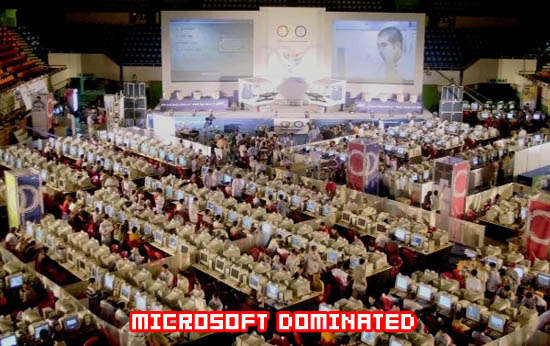 Microsoft quietly came in and rounded up all of competitive gaming, leaving no room for the PlayStation 3 or Nintendo Wii to play along.

Between the Xbox 360 and Windows PCs, Microsoft exclusively sponsors the World Cyber Games, Major League Gaming, and the Championship Gaming Series, leaving the other two standing outside in the rain. Not bad, Microsoft!

We’re very proud of the fact that these professional gaming leagues have picked Microsoft platforms… for their competitions,” said Shane Kim, corporate vice president of Microsoft Game Studios. “That’s a great endorsement from people who are pretty key influencers within the industry.”

Combine this with their online domination with their LIVE service, exclusives on cometitive favorites like the Halo series and Gears of War, and an installed user base of almost 12 million Xbox 360s, and it looks like Microsoft has competitive gaming in the bag.

[via Gamepro — thanks, Justin]