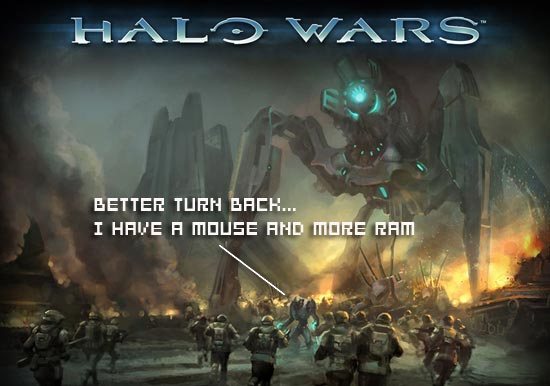 Now that the buzz surrounding Halo 3 has come to pass, fans of the series have been chomping at the bit to have at it with the next mythic adventure in the Halo universe, Halo Wars. Up until this point, we were all led to believe that the RTS game was strictly for the Xbox 360 — then came whispers from gaming site Angry Pixel that this just wasn’t the case.  Quoting an inside source they claim to have at Microsoft:

“Halo Wars, touted as an Xbox 360 exclusive, is also apparently in development for the PC. But that’s not all – apparently the game will also feature cross-platform play, a la UNO and Shadowrun, between gamers on the Microsoft console and their PC counterparts.”

Whether or not we had any doubts, it seemed reasonable enough at the time. Considering that RTS games and PCs are a match made in Heaven, it didn’t exactly strike us as impossible. Consequently, IGN decided to contact the guys at MS themselves, and the illusion was soon dissolved (well, maybe not):

“Halo Wars is being developed from the bottom up for the Xbox 360 and its control scheme to ensure that we deliver a groundbreaking console RTS experience. Given that, we have no plans to develop ‘Halo Wars‘ for Windows Vista at this time.”

If you are the Matlocking type (plenty of those around here), you no doubt zeroed in on the words “at this time” as the door still being open on this one. Will Halo Wars find itself on the PC somewhere down the line? If consumers say it must be so, I bet it does. Games like Halo cost a mint to produce, and only a fool turns down money.