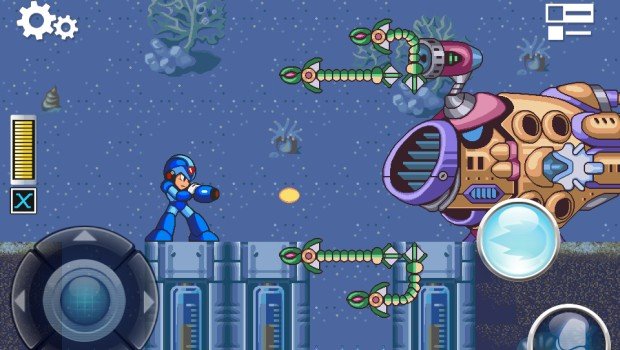 Famitsu has released screens of a Mega Man X iOS remake coming later this month in Japan. Aside from touch controls, online rankings, and 80 challenges, the game also features completely redrawn graphics. By “redrawn,” I mean “traced” — it looks like someone just drew over the outlines of the original sprites with a felt-tip pen, and the result is more than slightly jarring. I mean, is it just me or does X’s head seem fatter than usual? I really liked the throwback style from that Mega Man puzzle game a few months back, but the art here rubs me in all the wrong ways.

I’m curious as to why Capcom (or whatever company this was probably farmed off to) decided to remake the game when a remake already exists. Maverick Hunter X didn’t do so hot on the PSP, so this could have been an opportunity to make a little extra scratch with a modified port. What’s even more curious is that the art for the stage select boss portraits is official Maverick Hunter X art! Why would anyone do so much extra, unnecessary work to make something that ultimately looks so lazy?

Since this game is for iOS rather than a Japan-exclusive mobile service, I’m sure it will find its way out West eventually. I don’t know how folks could play a touch-controlled Mega Man game without smashing their faces against a wall, but I’m sure there are a few interested masochists out there.