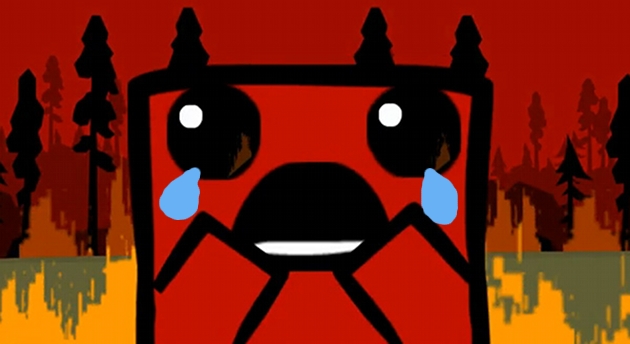 There is only one series of games about an Italian plumber jumping on turtles and eating mushrooms that make him grow twice his normal height. Likewise, there is only one game series about a hedgehog that can run tremendously fast and transform machines in the cute little bunnies by body slamming them. Aspects of these games have been borrowed by hundreds of different titles over the past 20 years, but on the surface, they remain unique.

I thought that would also be the case when it came to Super Meat Boy, the latest 2D platformer to hit icon status in the world of gaming. It’s inevitable that other developers borrow ideas from this critically acclaimed title, but I never expected the game’s core concept of “little defenseless square-man runs, jumps, and wall jumps through a treacherous field of giant, instant-death dealing buzzsaws” would be so shamelessly ripped and pilfered. Yet, here we are with Tobar, the upcoming iOS game seen above. This is something I should probably come to expect from iOS gaming by now, but it still makes me frown.

I asked Super Meat Boy co-creator Edmund McMillen about the situation, and he was actually pretty cool with it. Check out the full quote from Edmund below.

On one side, I feel really flattered. On the other, I dont really care.

He (Tobar‘s creator) admits he was inspired by SMB, but doesn’t feel he’s copying it, so at the very least I take that as someone was inspired to get into game dev because of SMB, and that’s awesome. We all start out emulating things we love, so I take it as a big complement.

Super Meat Boy is “a serious clone of Super Mario Brothers” in many people’s eyes. Granted I believe it goes the extra mile to make itself what it is… this game (Tobar) seems simple enough to feel harmless to me. I mean, if I found out these guys were my age and had done tons of apps before then I might care a bit more, but probably not much.

Either way, ripping games off seems to be the App Store’s thing these days, anyway. It would be hard to put the blame on the product of Apple’s lack of control over its own service. If Angry Birds can totally rip off Crush the Castle and make millions, and then be ripped off by countless clones, without Apple blinking an eye, then why should anyone out there feel like it’s wrong to rip off any game ideas? I actually believe there is a clone of everything on that service…

Sobering words from a man in the know. But what do you think? Where do you draw the line between tribute and rip off?