Coin App’s Max Blastronaut seems to have something of an identity crisis. Creator and lead designer Panya Inversin describes his game as “a classic four-player beat-’em-up with some extra bells and whistles: vehicles, hammers, shoulder-mounted blasters, [and] grenades, all affected by the gravity of the game’s small planets.”

That sounds great except that the Max Blastronaut I played at this year’s Dream.Build.Play competition was a Super Stardust-inspired shoot-’em-up.

There aren’t a lot of shooter-brawler hybrids on the market (Acclaim’s excellent The Red Star being a notable exception that springs to mind), and the results aren’t always graceful; nevertheless, Max Blastronaut has a few flashes of briliiance.

As the eponymous Max, players are responsible for saving the Blastro galaxy from the Dredge Miners, who scour the stars for natural resources, dessicating every planet in their path. I only played the first few stages, but the game seems to advance through a series of progressively more difficult planets that you must clean out, each with its own gravitational field. When Max reaches a new planet, he descends onto the surface in order to collect fuel to power his jetpack. Eventually, Dredge Miners attack, and Max is presented with two options: stay on the ground and brawl, or take to the air and shoot.

Under the best circumstances, the transition between brawling and shooting would be graceful and seamless, but I’m disappointed that, at least when I played Max Blastronaut, it wasn’t. I’m willing to admit that perhaps I didn’t pay enough attention to how the fuel system works, but I found that my time in the jetpack was sporadic and seemingly random, which a shame because flying and shooting is the more successful mechanic.

Don’t get me wrong, there’s nothing really wrong with the way Max Blastronaut handles the beat-’em-up–style gameplay, but it seems a bit overly basic. Max can punch, grapple, pick up weapons, and jump into vehicles and while fighting is an effective way to kill most enemies, it simply isn’t as fun as the shooting mechanic. Granted, I only got a chance to see one planet, so I didn’t have access to the grenades, rocket launchers, and other goodies, nor did I get a chance to experiment with the different gravity levels, but I have a feeling that most people will want to spend most of their time keeping Max in the air, where he truly shines. 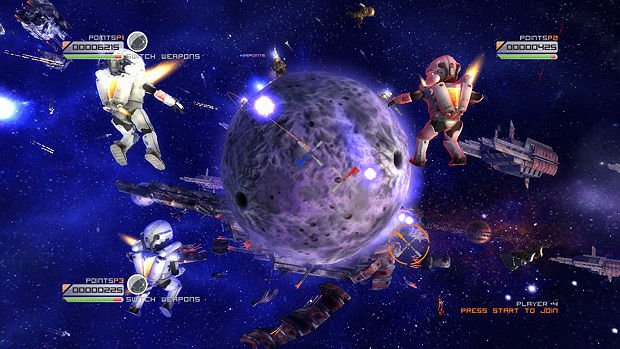 While Max is in the air, your view is fixed at a three-dimensional center while the planet rotates around you, reminiscent of Super Stardust. The controls are reponsive and smooth, and moving, aiming, and choosing weapons feels intuitive. Max has a full artillery at his disposal, using lasers, bullets, and rockets to dispatch Dredge Miners with ease. There are several different types of enemies, some of which will require you to use gravity to sling-shot your bullets around the planets.

Realizing that, by angling myself just right, I could shoot miners in the ass from the other side of a planet (and thus avoiding their shields) was one of those “aha!” moments that only videogames provide. Assuming that Coin App created enough different enemy types to keep Max Blastronaut‘s shooting sections interesting and fresh, the gravity mechanic itself might worth the price of entry (whatever that ends up being — no platform has been announced).

By way of features, Max Blastronaut supports drop-in/drop-out co-op for up to four players, twenty-four different planets, and a challenge mode. At its best, Max Blastronaut is a rewarding and fun shooter, brought down a peg by dodgy execution and uninspired (yet passable) beat-em-‘up mechanics. But don’t let that phase you: if 3D shooting is your thing, Max Blastronaut isn’t a bad place to start by any means. Apparently, the judges of the Dream.Build.Play competition agree: Max Blastronaut took 3rd place, and Coin App took home $20,000.