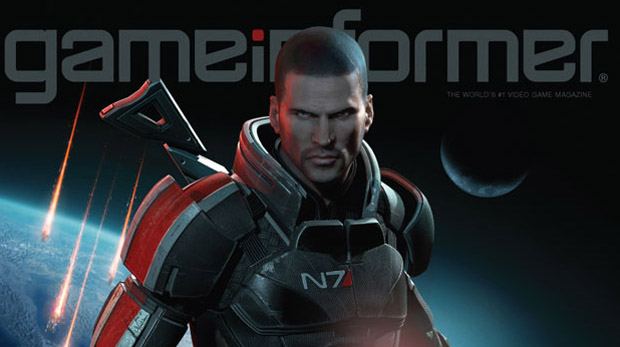 Since Mass Effect 3 is Game Informer’s cover story, and because people have the Internet, some details from the magazine have emerged thanks to NeoGAF and the GameFaqs board.

A few details concern confirmed squadmates, others are about Cerberus, and there’s a some gameplay details as well. Some of you might not want to know any of this before you get your hands on the game, but if you need more Mass Effect 3 in your life then check them out below.

Squadmates that will be “playable to some extent”:

According to the NeoGAF poster, there is a screenshot of Ashley with her hair down and “she actually looks hot.” It would be quite the achievement if that is true.

Confirmed to appear, depending on choices in Mass Effect and Mass Effect 2, but not as squadmates:

Cerberus is apparently out to kill Shepard, though there seems to be little info about whether this depends on what you choose at the end of ME2. The Illusive Man will play a “prominent role.”

Following the the events in the Arrival DLC, Shepard is “on Earth” for the trial (you know which one if you played Arrival) when the Reapers attack. From the Mass Effect 3 launch trailer, you already knew that Shepard was in space during the Reaper invasion of Earth — that trial is probably held on a space station.

As for the combat and RPG elements, it sounds like BioWare is seeking a middle ground between the first two games. Skill trees are larger and powers will evolve several times this time. Weapons are still in the style of ME2 (a set list) but the weapon mods from ME1 return to add some customization.

The different classes can now use any weapon type, but their restriction is now based on the number of weapons you can carry. The Soldier can carry all weapons at once, and there’s no info on the other classes but you can take your best guess on what would make sense for an Adept to carry.

Like in the PS3 version of Mass Effect 2, there will be an interactive comic to let you catch up (as if you’d need to) and to make new key choices for another playthrough. Also, no multiplayer!

BioWare’s Jarrett Lee has commented on the forums that they want to keep the story spoilers to a minimum this time around (captured here), saying “By the time the game ships you’ll be mad about the lack of story info ;).”

That’s cool, because even though I’d like to know the changes to the gameplay and the general idea of Mass Effect 3, I’d rather find out the rest for myself. Of course, this stuff comes from NeoGAF via GameFaqs, and without a Game Informer in my hands it’s kinda hard to confirm any of it. Sounds legit enough to me though. Shepard.