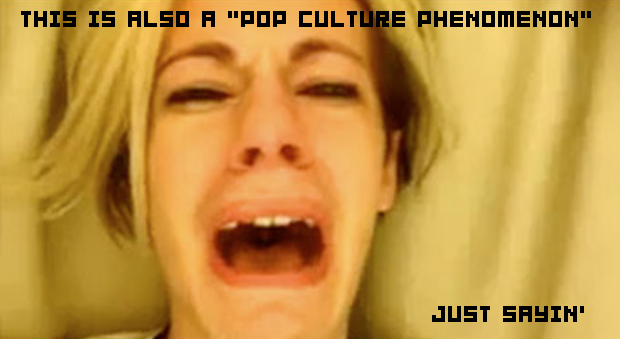 Sounds like EA has a lot to be happy about, according to this press release they’ve sent out today. Two million copies of Mass Effect 2 have been sold in the first week of release, which is nothing to shake a stick at. In addition, they make a point to mention the forty perfect scores given by review outlets and the average score of 96, making it the second highest-reviewed game on the 360.

And then they call themselves a “pop culture phenomenon.”

Okay, look, I understand a desire to pimp your product but that label is going a bit far, don’t you think? Fact is, more people will recognize the jack-off in the header image than Shepard. You make your zombified protagonist bigger than a dude who whines on the internet and we’ll talk.

In the meantime, I hear the game is pretty damn good but I still haven’t finished the first Mass Effect due to the host of niggling irritations and an abundance of better things to do with my time. Maybe this weekend.

If you want to read the full press release, it is posted after this link thingy here.

BIOWARE’S MASS EFFECT 2 HAILED AS 1st BLOCKBUSTER OF 2010
Game Earns Rave Reviews, Sells 2Million Units in Week One
Guildford, UK (January 29, 2010) – Forty perfect scores. Two million units. One pop culture phenomenon. BioWare™, a division of Electronic Arts Inc. (NASDAQ: ERTS), announced today that Mass Effect™ 2 has sold-in over two million units worldwide in its first week of release*. Lauded for its intense shooter gameplay and deep, hand-crafted story, Mass Effect 2 has earned an average review score of 96** — making it the second highest rated game of all time on the Xbox 360 platform***. Mass Effect 2 has earned 40 perfect scores, amassed over 30 editor’s choice awards and is donning the front cover of 20 magazines worldwide. On launch day, the term “Mass Effect” was in the top 10 trending topics on Twitter and most searched on Google News. MSNBC.com said, “Mass Effect will go down as one of the most influential video game series of all-time.”

Dr. Ray Muzyka, co-founder, BioWare and Group General Manager of the RPG/MMO Group of EA said, “Mass Effect 2 is poised to be one of the biggest games of 2010. We could not be more proud of the game’s universal acclaim and early commercial success.”

Mass Effect 2 launched this week hot on the heels of BioWare’s Dragon Age: Origins, the studio’s dark fantasy RPG which shipped in fall 2009. Dragon Age: Origins has earned an average review score of 91****, making it the highest rated original intellectual property from EA in the last year. Mass Effect 2 follows in BioWare’s tradition of delivering excellence on every front: gameplay, story, character development and visuals. Mass Effect 2 is an epic shooter/RPG set in a vast universe filled with dangerous alien life and mysterious, uncharted planets. In Mass Effect 2, players step into the role of the heroic Commander Shepard, leading a crew of some of the most dangerous operatives from across the galaxy on a mission so challenging that it’s potentially suicidal. Featuring intense action, a rich storyline, space exploration and engaging character interaction, Mass Effect 2 delivers an unparalleled gaming experience.

Mass Effect 2 is available for the Xbox 360 and the PC and is 15 by the BBFC. For more information, follow the development team on Twitter athttps://twitter.com/masseffect2 or visit the game’s official UK website at https://getmasseffect.ea.com.