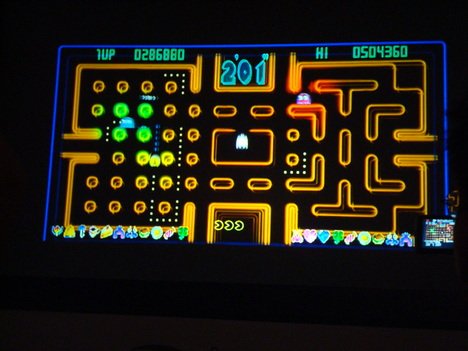 To everyone who e-mailed us about the “major” Xbox 360 announcement: thanks. We know. It’s not a price drop, it’s not a new hardware SKU, and no, Halo 3 Mini-Tales is not coming out on the Zune.

Today At the Pac-Man World Championships in New York City, Microsoft and Namco Bandai have “made video game history” by revealing Pac-Man Championship Edition for Xbox Live Arcade. This version of Pac-Man will include all of the playable boss characters like Vega, M. Bison, and … wait, sorry. I confused this with 1992.

The game will be available tomorrow morning (9AM EST) for 800 MS points, and will only be available on the Xbox 360. Who needs a price drop now?

Our very own Dick McVengeance was on-hand at the Pac-Man World Championships event, so expect pictures from the event later today (nude photos of Ms. Pac-Man not promised).

Hit the jump for the full skinny on Pac-Man Championship Edition.

Today Microsoft Corp. and NAMCO BANDAI Games made video game history by unveiling the “Pac-Man Championship Edition” — featuring the first new Pac-Man mazes in more than 26 years — available only on the Xbox 360™.

The “Pac-Man Championship Edition” is the same beloved “Pac-Man” game played in arcades of the ’80s but is updated with new features that former “Pac-Man” fanatics and new generations of fans alike will love. It includes new mazes that dynamically change shape during gameplay, six new timed game modes, new soundtracks and high-definition (HD) graphics. Details include the following:

– Xbox LIVE leaderboards, Achievements and Gamerscore
– Rated E for Everyone by the Entertainment Software Rating Board
– Costs 800 Microsoft® Points
– Available for download only on Xbox LIVE Arcade on the Xbox 360 starting at 0900 BST on Wednesday, June 6, 2007

Since launching in 1980 in Japan and in 1981 around the world, “Pac-Man,” its host of ghosts and its famous “wakka wakka wakka” sound have become global pop-culture icons. This arcade game played an instrumental role in establishing the video game industry in the 1980s, while the launch of Xbox LIVE in 2002 was a key factor behind the rapid growth in popularity of online gaming. Today, Xbox LIVE Arcade is the premier online destination for digitally distributed HD games offering fans around the globe a great opportunity to connect, compete, and enjoy the fun.

“‘Pac-Man’ was the game that ignited the world’s passion for video games, with every member of the family hooked on avoiding Clyde and eating up all the Power Pellets,” said Jeff Bell, corporate vice president of Global Marketing for the Interactive Entertainment Business at Microsoft. “It is a tremendous honor that NAMCO BANDAI and Toru Iwatani are going to use the power of the Xbox 360 and Xbox LIVE Arcade platform to deliver the next evolution of ‘Pac-Man’ to the world.”