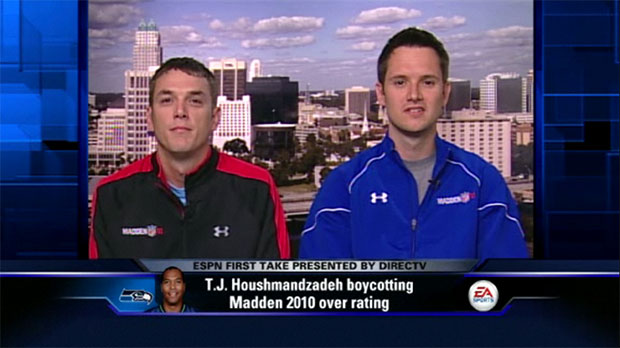 For those who thought that Seattle Seahawks wide receiver T.J. Houshmandzadeh was merely joking when he complained about his attributes in Madden NFL 10 and said he was boycotting the game, well, you were mistaken. But if you thought the media was making a mountain out of a molehill, you may have been right on that count.

On Friday morning, Madden NFL 10 developers Ian Cummings (lead designer) and Donny Moore (ratings guru) appeared on ESPN First Take, along with Houshmandzadeh himself via telephone, to try and sort out this mess once and for all. You can watch the segment yourself after the jump.

Moore told host Dana Jacobson that EA Tiburon determines player ratings by watching hours upon hours of game footage, as well as scouring scouting reports and taking statistics into account. He also tried to explain to Houshmandzadeh that the rating system was completely overhauled this year, but he didn’t seem to want to listen.

Interestingly enough, though, Houshmandzadeh quickly backed down from his initial objection about his overall rating, acknowledging that he was okay with a 91. Instead, he moved on to the question of his speed, listed at an 81. Moore, a man with an elephant’s memory, rattled off a few of his other (better) ratings — like route running and hands — and it seemed to mollify the receiver.

However, in the end, Houshmandzadeh remained steadfast in his boycott, and his claim that he’ll prove to the world how good he is with the Seahawks this season. He says that if a mid-season roster update improves his ratings, he might relent. I still think the developers humbled him, though — what about you?