Runner is a game by Anthony Burch, Ashley Davis and myself — all members of the gaming press. It’s a strange game, caught in a strange situation.

Who’s going to review it? Other members of the gaming press? Not likely; gaming enthusiast sites don’t tend to review free games (especially ones made by their competitors). Cutting out every other gaming site only leaves Destructoid as a potential source for reviewers. Quite a few of our c-bloggers actually did take a shot at reviewing Runner, with some really interesting and thought-provoking results. Still, any member of Destructoid is going to be looked at as personally involved with a game made by another member of Destructoid, so that pretty much disqualifies any of us (staff and community members alike) from giving the game a “real” review.

It’s for that reason that we had to reach out beyond the gaming press to find a review team that would be both  unbiased towards the game, and smart enough about games as a medium to know what they’re talking about. In short, we needed some game developers.

Alex Neuse, CEO of Gaijin Games (Bit.Trip Beat), and Luc Bernard, CEO of Oyaji Games (Mecho Wars) are here as honorary professional game critics, ready to review Runner for your reading pleasure. Hit the jump to hear their thoughts on the game.

(Alex has worked in the industry for over eleven years. During his time at LucasArts, he contributed to the development of Star Wars Racer, Jedi Power Battles, Grim Fandango and Gladius. Since then, he has gone on to create his own development studio, Gaijin Games. His latest work is the critically acclaimed Bit.Trip Beat.)

“Runner.” Aren’t we all runners, really?  We’re all running from something.  Someone…

Or are we running towards them?

These are the questions you might ponder as you play Runner, an experimental/independent/amateur game created by the good folks at Destructoid.  However, if you aren’t intrigued enough by the simplistic gameplay, as you turn away from the game you will probably be asking yourself “Why did they make this thing?  Guh!”  And you’d later be bummed to realize (as you read an article about the game) that it’s really pretty enjoyable and capable of making you think–despite its simplicity. 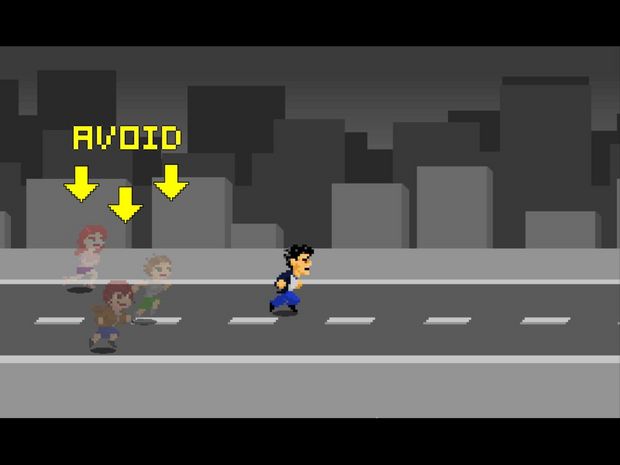 Basically, however, the game is an artsy-fartsy recreation of that horribly difficult part of Battletoads that’s still preventing me from beating the game after decades of trying.  Upon firing up Runner, the images of jet bikes and membrane jumps that shot through my soul like a horrible PTSD flashback nearly made me throw up on my laptop and hide under my coworker’s desk crying.  But the neutral grays and pleasant music calmed me down and I gave it a shot.

There are a few differences between Runner and the Wind Tunnel in Battletoads.  One is the difficulty, as I’ve beaten Runner and have only had nightmares of beating the Wind Tunnel.  The other is the way that Runner weaves difficulty into the story through picture bubbles that obscure your path.  The actual task at hand–running and avoiding obstacles–doesn’t get all that tough.  But dealing with the distractions of lost and/or unrequited love, ninja violence, and obsession/jealousy while moving along in stride compound the difficulty, just like these same issues do in real life.  And the thing is, these picture bubbles are very well drawn and pleasing to behold.  They are nefariously so.  Because you want to look at them, but really, you shouldn’t.  You should just move on.  If you don’t, you’re going to get caught up in the ghosts of your past and ultimately suffer a sad and bleak game over. 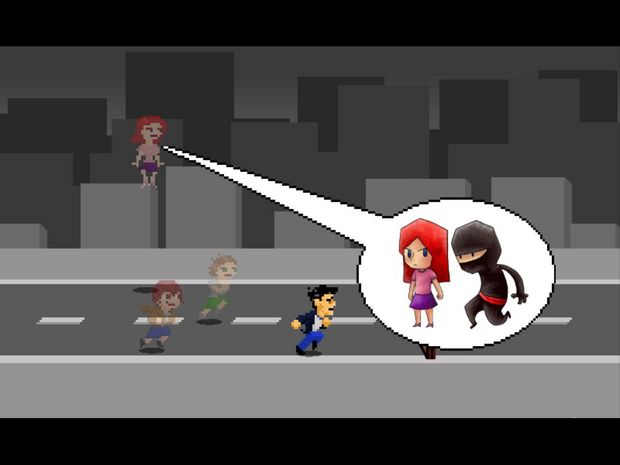 Some would say that life is about progress, and that we should always be moving on, looking forward to reaching the next goal.  It seems that the developers of Runner felt this way, or were at least exploring this notion.  The more you play, the less distracting the memories or picture bubbles become.  They haven’t changed, but you are now able to cope with them.  I found this to be an interesting observation as I played this rather simple game.  Here was a game, made by a bunch of nerds with a bee in their bonnet and I’m having realizations about the complexities of life.

Without giving away too many spoilers about the game (which will take you less than fifteen minutes to beat), I will tell you that Runner explores the notions of moving on from the past, finding independence and strength in your passions, and loving against all odds, only to lose that which you’ve tried so hard to get.

As Alfred Lord Tennyson said, “‘Tis better to have loved and lost than to have never loved at all.”  And those of you who have beaten Runner will know exactly what I’m talking about. 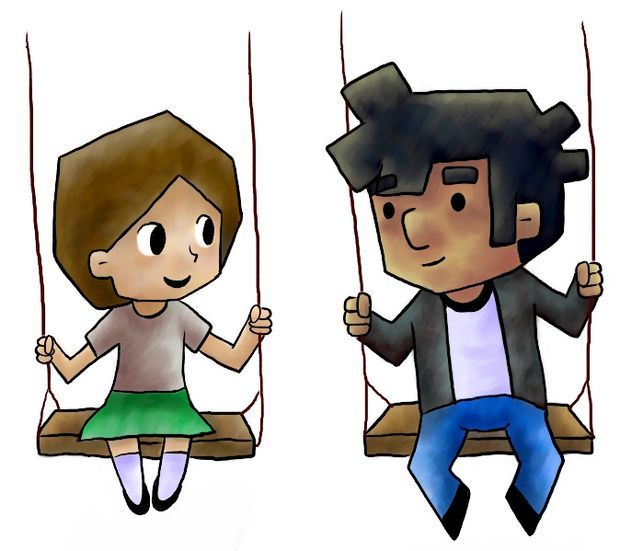 The thing that truly inspires me about games like this, (see other similar games below) is how much an interactive experience can move a person.  Runner is an action game, really.  And it’s cute.  The sprite work is good, the environments appropriate, the music sufficient…  But while each of the pieces are fine on their own, they shine as a whole–if you as the player will let them shine.  Because Runner is not for everyone.  People without an appreciation for the inherent power in interactive mediums won’t care nearly as much as the connoisseur will.
And I’ll tell ya, I may be reading WAY too much into it.  But then again, is that even possible?  Because this is my reaction to the game, and this is how I feel after playing it.  And those experiences are just as meaningful and true whether the developers set out to evoke them in me or not.  Whatever their intentions, I’ve enjoyed this game enough to write an article, and that’s saying something about the power of a few pixels moving around the screen in a relatively simple way.  Games don’t have to be complex to be worthwhile.  And Runner is a good example of that fact.

Other examples of very simple games that have moved me are Passage and The Graveyard on the PC.  Somewhat more complex, but also simple when compared to most games these days are Coil, Flower, and flOw.

I’m not saying that these games are necessarily good or bad, but they all have one thing in common–the ability to move a person.

Luc Bernard
(Luc is a self-described “drunk and outspoken bastard.” He’s been working in or around the videogame industry since he was 13 years old. His powerful scenario designs and illustration skills have already gained him a large following, despite the infamous events surrounding the launch of his first commercially released game, Eternity’s Child.  Luc is currently the CEO of his own studio, Oyaji Games, and is hard at work on his next game, Mecho Wars).
Now maybe I just plain suck at playing this game but I haven’t managed to finish it.

I’m trying right now to figure out what the story is. Maybe there is none or maybe it’s just an artsy farty game.

So you have this character that is being chased by girls. Maybe he is very attractive, or that he porked them and now they want to be shagged again. 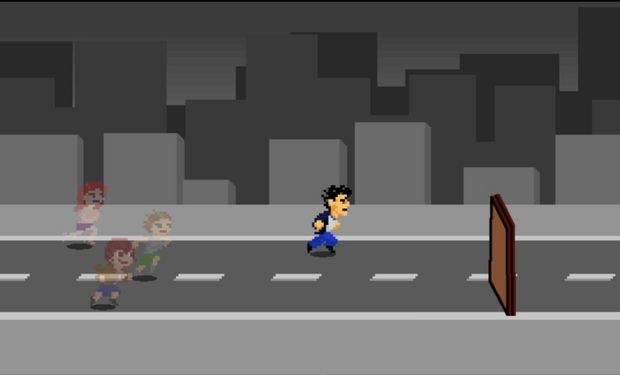 Come to think of it if I ever did a game about my relationships it would involve the character being attacked on the subway, have a chair thrown on him. Then maybe spend a year of being a drunk so a bunch of mini games where you must drink as much vodka possible without puking. And then to meet another girl, and then fuck up everything yourself and then have her leave and not talk to you at all, and tell everyone that you’re fucking insane.

Now that might make a entertaining game. I should consider doing it.

The main problem I have with Runner is those bloody speech bubbles that appear at one moment that go across the entire screen, I couldn’t see where to bloody go anywhere. It was really fucking frustrating. It actually ruined the entire game for me, so I ask Anthony this. Get those fucking speech bubbles out of the game and then I’ll replay it. Otherwise it just makes me want to smash my PC into the first person that comes near me.

On the other hand I did like the retro graphics, when the game started I was quite excited with those simplistic buildings when they started to appear. Up until those fucking bubbles appeared.

But maybe what this game is trying to tell, is that woman are dangerous and fuck with your head and drive you insane, like this game did.

(Thanks to Luc and Alex for their time. Be sure to check in on both of their sites for future game reviews.)