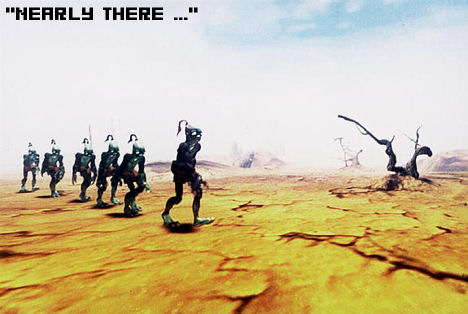 Last week, we posted the news that Maxis co-founder Jeff Braun had confirmed a new Oddworld game, and there was much rejoicing. Now the head of Oddworld Inhabitants, Lorne Lanning, has added his own confirmation.

“I can confirm that we’re working with Jeff on Oddworld stuff,” stated Lanning. “That’s all I can say at this time. [Braun] was giving a talk to a school, but there hasn’t been a formal announcement, yet.”

For me, Oddworld Inhabitants was a tragic creative failure. Originally designed as a quintology, we only ever got two official titles in the series, Abe’s Odyssey and Munch’s Odyssey. There were other spin-off games (the last game being ’05’s Stranger’s Wrath), but the project was canceled before its grand designs could ever be close to realized. Oddworld Inhabitants scrapped the idea when they decided to move into animated films, which was a real shame as the games and universe were excellent.

With a ridiculous six games unfinished, there’s plenty for the team to be getting on with. Will we finally get Squeek’s Odyssey? Sligstorm? Hand of Odd? Probably none of those, but I’m going to wait expectantly for a quality Oddworld game regardless. It’s been far, far too long.