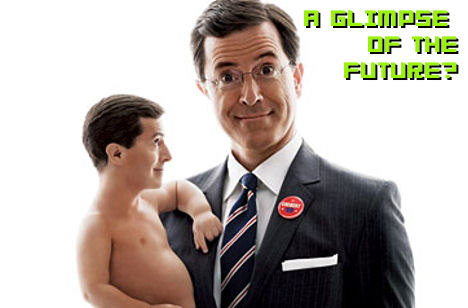 Game designing nutcase Richard “Lord British” Garriott will be taking the DNA of satirical reporter Stephen Colbert into space. The Ultima creator is due to visit the International Space Station in October, because he is eccentric and that’s what eccentric people do.

“I am thrilled to have my DNA shot into space, as this brings me one step closer to my lifelong dream of being the baby at the end of 2001,” proudly states Colbert.

Lord British himself is also pleased to be taking a bag of Stephen with him into Space: “In the unlikely event that Earth and humanity are destroyed, mankind can be resurrected with Stephen Colbert’s DNA. Is there a better person for us to turn to for this high-level responsibility?”

A planet populated entirely by Stephen Colbert? Could we exist as a society that does nothing but take the piss out of itself?