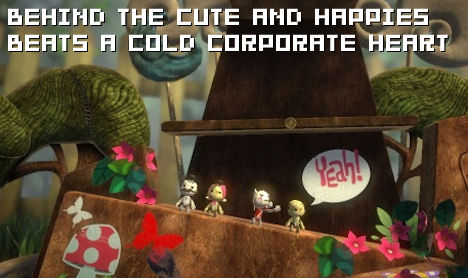 If you’re a big fan of user levels in LittleBigPlanet, the advice of the day seems to be this — don’t get too attached to them. Reports have been coming in of levels being “moderated” without warning. That’s a polite way of saying they’re getting deleted, and users are not being given the courtesy of an explanation.

The main issue seems to be over copyrighted material — which kind of cuts the scope of what players can do in half, really. Levels based on Metal Gear Solid or Sonic the Hedgehog are being taken down, even if they merely contain a few items based upon the IP. Once a level is deleted, you can’t even just take out the offending items and republish. The level’s gone, and you have to start over from scratch. Great news for people who spent an hour or so crafting something.

The copyright issue is fair enough, but it seems that users were not told this before they wasted their time. One player claims that even his level based on the PlayStation 3 was deleted. If a PS3-exclusive game can’t even allow assets from its own platform … that’s a bit demented. The moderation is also inconsistent, with other copyright-breaking levels remaining completely untouched. Moderators are apparently looking into providing more feedback when deleting people’s work, but that hasn’t helped the people who’ve been screwed over so far.

This is a pretty sad issue, and seemingly one in a long line of problems associated with LBP. While it’s true that Media Molecule can’t be blamed for oppressive copyright, it kind of shows just how much of a problem user generated content is going to have on consoles. Using completely copyright-free assets for LBP is actually a pretty decimating limitation when you think about how much you can’t do. If this is the way things are to be for console games of this nature, it looks like the PC modding scene has nothing to worry about.