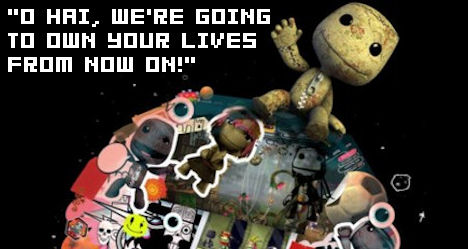 LittleBigPlanet isn’t even on (most) store shelves yet, but if you thought Sony would be letting this IP go quietly, then you must be some sort of village idiot. According to a BBC article on British game development, a LittleBigPlanet sequel is already being planned, while the potential for turning LBP into everything from comic books to action figures is being discussed:

LittleBigPlanet has big potential. Right now it is just a game but the firm, with Sony, are in talks to turn it into a franchise that could mean spin offs including comics, cartoons, and action figures as well as a publishing platform itself for other brands’ content.

Evans says: “There’s been a lot of being in the right place at the right time. When we went to Sony we were a tiny but very experienced team. Sony had to trust in us in terms of the quality of people.

“It was amazing how much they understood what was a new concept; it was quite blue sky.”

Even before the game has hit the shops, the team are already at work on a sequel.

Would you buy an LBP comic or an action figure? Would you watch the cartoon, wear the T-shirt, eat the breakfast cereal and — of course — play the customizable card game? Would YOU smoke LittleBigPlanet brand cigarettes or slap a Sackboy condom on before slipping between your Media Molecule sheets?

Seriously though, it’s interesting to watch Sony jump on this one. It’s obvious how important the game is to the PlayStation 3, but will it be the savior that Sony has been looking for? Let me sit back in my LittleBigPlanet-brand office chair and wait to find out.