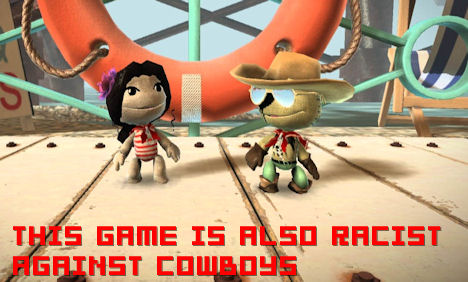 Following the story that Sony has recalled LittleBigPlanet for fear of offending the Islamic gaming community, developer Media Molecule has spoken out on the situation. Stating they are “shellshocked and gutted” over this late delay, the team revealed that they wanted to patch the offending item, but Sony wouldn’t let it happen.

We learnt yesterday that there is a lyric in one of the licensed tracks which some people may find offensive, and which slipped through the usual screening processes. Obviously MM and Sony together took this very seriously. LBP should be enjoyable by all. So within 12 hours of hearing about this issue involving a lyric (in Somalian, I believe!), we prepared an automatic day 0 patch and had a new disk image ready; however a decision was made within Sony that the right thing to do for quality and support of people with no on-line was to replace existing disks. They assure us that they are doing everything in their power to get things straightened out as fast as possible, and will announce dates soon.

This whole debacle is very dismaying, and it’s a shame that we as a society are so terrified of offending someone that huge upheavals like this have to happen. I just hope that LittleBigPlanet doesn’t get overshadowed by this bottled controversy, as it is too ambitious a concept to be colored by such a ridiculous scenario.

All this over a few words. It’s incredibly silly when you think about it.