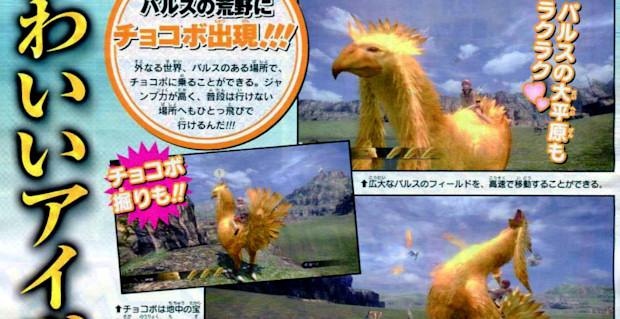 This is what Chocobos look like in Final Fantasy XIII, and as you can see, they’re not so cute anymore. In fact, they look somewhat ridiculous, with spiky mohawk crowns on their head and big spaniel ears. Still, they’re absolutely huge, as you can see how it dwarfs the rider. Probably the biggest they’ve ever been, if you’re keeping score at home.

In addition to the Chocobos, another summon has been revealed. This one belongs to Hope, and it’s the classic Alexander. As always, Alexander takes the form of a massive castle, ensuring that every battle with him will be a well fort one. Haha, that was a funny piece of humor.

Shonen Jump magazine confirmed that a Final Fantasy XIV beta will be included with the Japanese release of XIII. No word on whether we dirty roundeyes will get a similar deal.