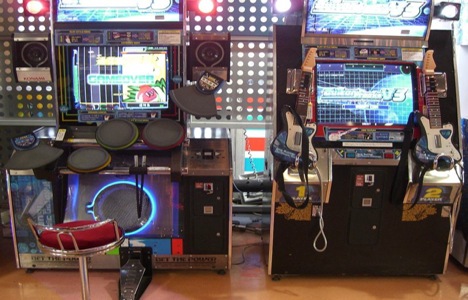 Yesterday, Konami issued some papers and officially sued Harmonix for patent violations. The claim is that Rock Band’s instruments and visual feedback interface hit a little too close to patents created by Konami back in 2002 and 2003. Unfortunately for Konami, suing won’t make the images of Drummania go away.

Konami is demanding cash compensation, plus an order that would block Viacom and Harmonix from using the inventions, according to the complaint, filed yesterday in federal court in Marshall, Texas. The suit names Harmonix Music Systems, Viacom, and Viacom’s MTV Networks Co., which owns Harmonix.

This shouldn’t come as too much of a surprise. Konami has always had a stick up their collective bums about the success of both Guitar Hero and Rock Band. Konami can probably be considered the grandfather of the music genre with games like Dance Dance Revolution, Beatmania, and Guitar Freaks, but it’s their own shocking inability to adequtely localize these games that may have led it all to this point. When asked for comment, Viacom didn’t even know they were being sued. Apparently Konami’s legal department is as slow to the punch as their own recognition that another guitar game has been pumping out sequels the last three years.