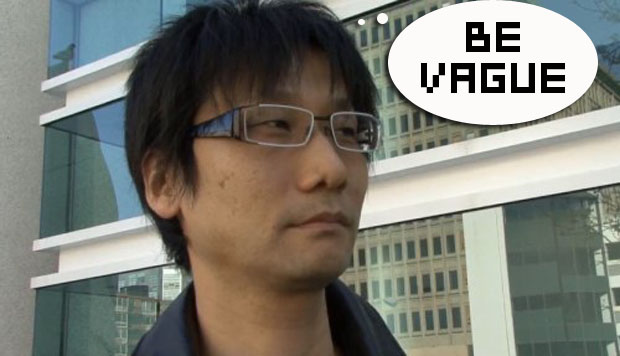 We laugh about how vague and difficult to understand the Metal Gear series has always been, but you have to consider that that stuff has a point of origin … and apparently the inside of Hideo Kojima’s brain is similarly vague. For instance, in a recent chat with IGN, Kojima offered up these tidbits about what to expect from him in the future:

“The one that I said that I’ve been wanting to make – this is a new franchise and a new title,” he said, confirming at least one fresh property under development alongside Metal Gear Solid: Peace Walker and Metal Gear Solid: Rising. “For the other couple of titles, it could be something that you always wanted to have. It could be, or it could be something else. It’s a matter of the timing of when we can get it out.

Vague much, Kojima-san? At any rate, it doesn’t really matter what the man makes –he could try to sell people a bucket of his used washcloths and someone would be interested in it. Of course, amidst all the cloudiness, there is a a grain of something interesting here: something people have really wanted could be coming. I’d like a Snatcher remake personally, but I’m not going to hold my breath.