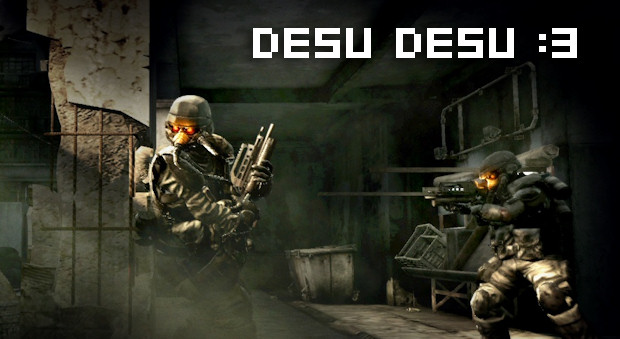 A new update is scheduled to appear for Killzone 2 on April 22, so be prepared if you’re planning to game that day. The last thing you need is to be ambushed by one of the PS3’s slow-ass patches. It is a good patch though, for it allows us roundeye devils to take on Eastern players when the game finally hits Japan this week.

As always, Guerrilla also has a lengthy list of minor tweaks being made to the game, none of which look terribly mindblowing, but are sure to be appreciated. The number of exploits being stamped out is always welcome, although I must say I’m yet to encounter anybody glitching the game up for me.

You can hit the jump for the full list of changes. Or not. It’s totally up to you, as per the freedom our forefathers died for.

AI – Bots now skipping disabled/destroyed MGs in warzone when requesting mounted guns.
AI – Do not claim waypoints for the previous character when it’s dead.
AI – Fixes bots getting stuck trying to arm/disarm S&D object when mission is already over.
Campaign – Fix for potential progression bug in Salamun Bridge.
Clan – User name, not users clan displayed in rankings
Clan – Winning 10 Clan Challenges causes the user to become stuck on the medal awards screen.
Controls – Lean & Peak – Zoom hold on and out of ammo it switches between regular/scope view rapidly.
Cosmetic – Blue screen tint which indicates scout cloak is occasionally enabled and will remain indefinitely.
Cosmetic – White squares on the grenade counter merge together when displayed in 1080p
Create Game – “Badge Combination” option does not work properly
Create Game – Online – “clan only” presets apply even after a player leaves a clan
DLC – DLC pack 1 – ‘Steel & Titanium’ support DLC – New Loading screens advertising the first DLC pack.
Exploit – Helghan Industries – Player getting out of map fix.
Exploit – Radec Academy – User is able to gain access to the roof when revived in a specific location.
Exploit – Reviving player stuck in wall collision can result in him spawning outside level
Exploit – Salamun Market – One sided wall allows people to be seen and shot from outside where they cant see or fire out
Exploit – Tharsis Depot – Player can get out of the “normal” play area and can get into some sniper/camp spots
Feature – Invite player from friendslist Feature – Join Clan Member list added.
Feature – Join Game – 17-24 players filter.
Feature – MP – Moving while seeing scores after pressing SELECT
Feature – The radar/map now has a larger radius
Feature – Three additional ‘Harcore’ Ranks added to the top limits.
Front-end – Add support to display more than 8 maps when creating a game /challenge/tournament
Front-end – Sorting ascending and decending ranks working better in ‘Rankings’
Front-end – When in a squad, the Valor Trophy is visible in the Squad Tab, however the users rank is not being displayed on top of it.
Mods – Official tournament to be displayed first followed by custom created tournaments
Mods – Additional functionality made avalable to the in-game moderators.
Network – Server side fix for full games being displayed incorrectly.
Network – User is unable to use the ‘Join Clan Member’ tab due to Network Error Code 20002.
Online – File-synching with the Japanese release of Killzone 2 on the 23rd of April.
Sound – Turret placing sound continues when killed.
Stability – Crash when synching gamestate after a full mapcycle
Stability – Hang on a screen with a blank message window just before a message appears.
Stability – Reducing the load on the server related to syncing the buddylist
Stats – If a clan wins 24 Clan Challenges and goes to the result screen, the medal acquisition screen, which normally displays when you win 25 games, will display.
Stats – Number of air-support grenades used by tacticians does not add to the stats of joined user correctly.
Stats – Number of spawn-grenades used by tacticians does not add to the stats of joined user correctly.
Stats – User sometimes does not receive 1000 valor award when winning 10 Clan Challenges.
Text – % character not displayed correctly on the creating game dialogue box after selecting to create game.
Text – If a client receives an invite from a clan which has a ‘$’ character in the clan name, the recipient will get kicked
Text – Minor Italian localization fix.
Text – Minor Japanese localization fix.
Tournament – Game decides winner if one of the two teams doesn’t spawn in
Trophies – Fix for Wargod trophy unlocking pre-maturely