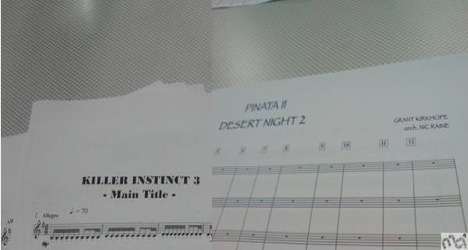 A little while back, we ran a rumor involving the supposed appearance of Killer Instinct 3’s sheet music. Since then, a few other gaming communities have tried their hand at cracking the Internet’s greatest mystery, and it appears it may have been solved, or at least, partially solved. The picture of the sheet music that we ran had a fairly identifiable table in the background, and the guys at GiantBomb (via Music4Games) are reporting that the sheet music from Viva Pinata: Trouble in Paradise has been pictured sitting on the exact same table.  As you can see above, the resemblance is quite striking.

Assuming that a hoaxer didn’t borrow the same table from the Prague recording session that the Viva Pinata document stems from, then it looks as though we may have the confirmation that the music is real. A few questions remain, though. Is the KI 3 music actually tied to the game, or is it being used for something else entirely? Perhaps this is all the result of some clever naming of a Viva Pinata tune.

Chris Titlon, a real videogame music composer, tried his hand at recreating the theme music in its final form. You can listen to it here. It is quite spectacular, and I would totally punch dudes with TJ Combo while listening to it.