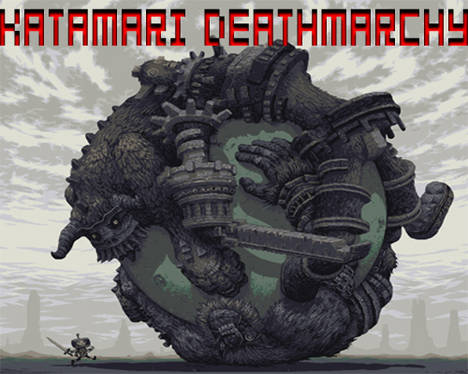 These are just a few of the words that come to mind when thinking of the worlds most dangerous murder simulators, a series of “games” that were clearly not so much made by a developer as they were crafted by the combination of madness and pure hatred of a greater daemon from the darkest, most evil reaches of space and time.

Don’t let the colorful exterior fool you into thinking that these “games” are anything but the most devious torture simulations and terrorist training tools ever devised by anyone who has ever devised anything. These “games” start innocently enough; just pick up things like tacks and erasers to create a larger “Katamari” (a word that I’m sure actually means “Ancient Evil Engine Of Doom”), and you might even be tricked into thinking that these “games” merely simulate the wholesome act of cleaning ones domain, but soon enough things take a turn for the EVILER. Read more after the jump.

Once the murder simulator has effectively trained you to use your “Katamari” to selfishly horde small inanimate objects, you begin to pick up small animals; animals that have done nothing to you and wish only to exist in peace. However, once you have begun to walk the path of darkness there is little you can do but to lose yourself in the madness and hate for all living things that these murder simulators exude at every turn.

Once you’ve been trained to ignore the screams of small animals as you “roll them up” (a thinly veiled drug reference) the murder simulator becomes even more murdering and simulatory by allowing you to finally feed the ancient evil Gods that you no doubt will be worshiping at this point, by giving you a “Katamari” large enough to pick up HUMAN BEINGS. 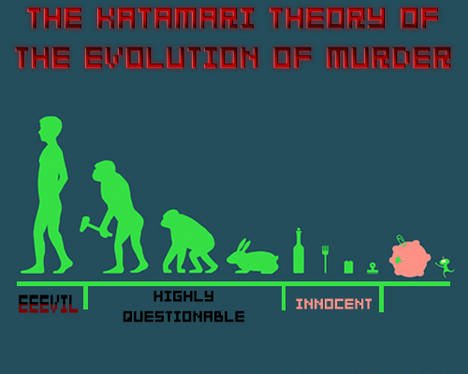 Not content to just pick up humans, the first target of your rampage are mere CHILDREN, simply because they are the least resistant to your rolling ball of death and destruction. Their screams echoing out across the landscape as one-by-one you harvest their bodies to further fuel your vile campaign of murder.

Eventually your “Katamari” grows to such a size that you begin to roll up entire buildings, the screaming occupants of which are left to tumble around endlessly, no doubt receiving wounds the likes of which make them envy those that are already dead. Not content to stop there, the murder (or should I say apocalypse?) simulator then has you consume entire landmasses and continents, leaving nothing but a terrible and final silence in your wake. 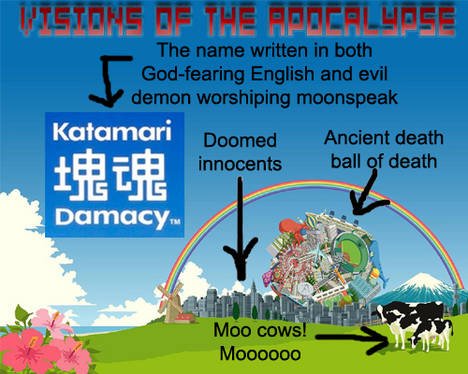 And what fate befalls those that survive being rolled up? Their reward is to be ejected into space like so much human detritus, becoming another celestial body made of pain and suffering, that will no doubt house an ancient God that will erect a kingdom of blood and bone, fueled by malice and terror.

Who would demand such mindless chaos and destruction? 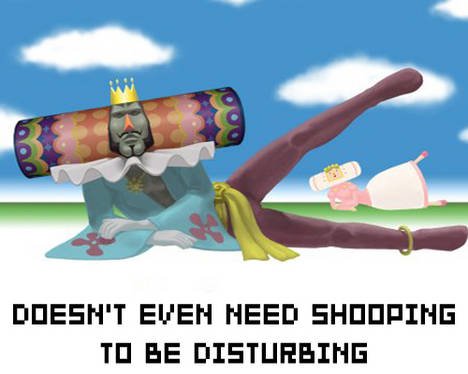 That’s right, the one that sends you on your terrible quest is none other than your father, possibly Satan himself poorly disguised as a human, claiming to be “The King Of All Cosmos”.

What does this make you? Your father is Satan, and you are constantly referred to as the “prince”. This means that you must be… 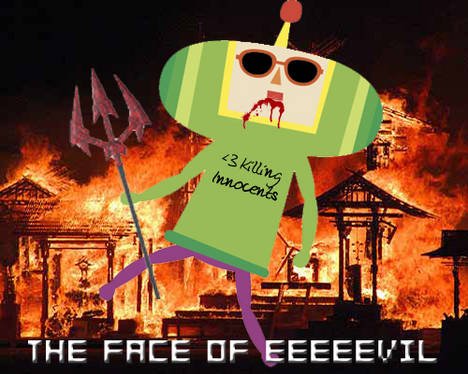 I rest my case with a simple plea:

Now if you’ll excuse me, I have to go draw some conclusions from Viva Pinata regarding its use as a tool for spreading communist propaganda.