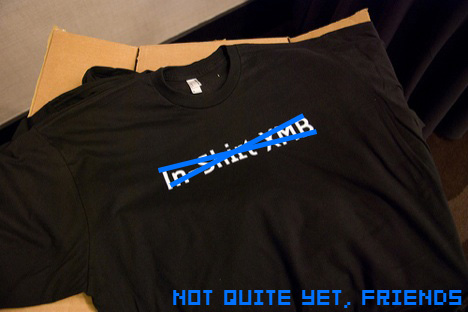 Less than eight hours ago, we brought you the news that Sony would be updating the PS3’s system software to version 2.36 “soon.” Well, they weren’t kidding; PS3 owner (and Vent lifer) cjpkiller let us know around 11:30 PM EDT last night that the v2.36 update was available for download through the ‘System Update’ option in the Settings tab of the XMB.

I just downloaded and installed the new software update myself. For a minor update — it’s aimed at “improving system stability when playing select PlayStation format software titles” — it sure took its time. I clocked the download at 16 minutes, and the installation took an additional three and a half minutes.

At this point, as with all firmware updates, v2.36 is only available through the XMB. It takes some time (usually about a day) for Sony’s official site to be updated; right now, only version 2.35 is available for download.

I gotta believe that your problems playing that decade-old copy of PaRappa the Rapper — if you were having any — have now disappeared.

[Update: According to Y0j1mb0, Sony has also released the v4.0 firmware update for the PSP. I can’t verify this myself, since I don’t own a PSP, but Dtoid’s resident geezer is a trustworthy source. As for downloading the v2.36 PS3 update from the Internet and updating your console that way, ParaParaKing has graciously provided a direct link to the update file (apparently, it’s already available on the Japanese PlayStation Web site). Thanks, guys!]