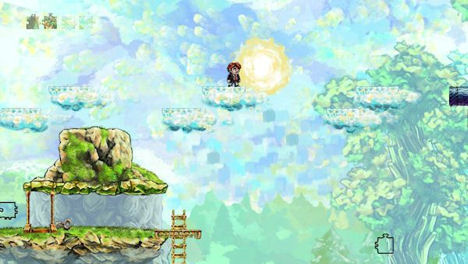 Braid‘s been out for a week, but the Internet is still talking about it. Having become a critical darling for his evocative puzzler, creator Jonathan Blow also has good news in the sales department, and confirmed that it looks like he can afford to make a new game thanks to sales of Braid continuing steadily since launch.

Sales are now slower than they were on launch day, but not too much: the sales didn’t just die after the first few days, as they do with some games. As a result, it looks like I will be able to make the next game, without needing to get a job that would interfere with that. (The estimated sales so far of 55,000 are not enough for this, but extrapolating into the future, the situation looks safe). Thank you, once again, for making that possible.

Blow also had some numbers for anybody interested in Braid stats:

As I write this, there are 62,242 entries on the main leaderboards. I don’t have official sales numbers for the full week, but I would guess about 55,000 people have bought the game so far.

18,141 have completed the game (or at least gotten 60 puzzle pieces, since that is what the leaderboard shows).

528 people have completed the Full Game Speed Run. Of these, 238 have beaten the challenge time, and thus gotten all 200 Achievement points that you can get from Braid on Xbox Live.

Thousands of people have been playing the single-level speed runs. There are 5,098 people on the Leap of Faith speed run leaderboard, for example.

This is great news all around, and it’s encouraging to see that in this era of childish mainstream novelties, a game that dares to be different and provide an intellectual challenge (in more ways than one) can manage to stand on its own two feet. Hopefully Blow can start work on a new game soon … if only so I can stop talking about bloody Braid.